Canadian Tenors Drop Everything For Bulembu 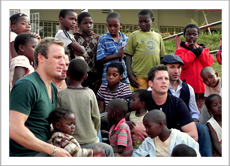 Vocal quartet the Tenors (a.k.a. the Canadian Tenors) have performed marquee gigs across the globe, from the 2010 Vancouver Olympics to Elizabeth II’s Diamond Jubilee at Windsor Castle, but when asked what charity they’d drop everything to play a benefit for, member Clifton Murray doesn’t miss a beat.

“We actually have dropped everything to play for Bulembu,” Murray tells Samaritanmag, while doing interviews with fellow tenor Victor Micallef to promote their new album, Lead With Your Heart.

Bulembu International is an umbrella organization for a number of groups working to assist the former African mining town of Bulembu in Swaziland where, according to the website Bulembu.org, the citizens are struggling under the highest HIV/AIDS infection rate in the world (38 percent). With negative population growth and current death rate, the Swazi people could be extinct by 2050.

“This disease has decimated a generation of Swazis,” the site continues. “The loss of so many young parents has undermined traditional family structures. The result – a country-wide orphan crisis. There are currently an estimated 120,000 orphaned and vulnerable children in Swaziland (15 percent of the total population) who have limited or no access to formal social support and have been left to fend for themselves.

“Add to all this almost 78 percent of Swazis live below the poverty line, with two-thirds living on less than $1 a day, and you have a national crisis.”

The not-for-profit Bulembu organization — which is functioning as something of a social experiment and relief project rolled into one — aims to “restore hope to the people of Swaziland through community enterprise and community care” including a health clinic, schools, churches, training centers and other community organizations.

“We’ve helped raise $2.2 million to date,” says Murray, whose group has performed the annual Voices of Bulembu concert twice, the inaugural one in 2009 and 2010. The Tenors have also visited Bulembu twice, once in 2008 and again in 2010.

“The development in Bulembu has been phenomenal. They went from really having nothing – very desperate living conditions – to having a water treatment plant, a dairy farm, a lumber yard and roads that are paved.

“These aren’t handouts,” he continues. “It’s actually building and educating a community, feeding them, providing medical supplies and helping people become leaders of the community.”

According to Canada International, in 2011, after four years of support ($9 million raised), Bulembu population is 2000, including 270 orphans, and has 550 jobs at a sawmill, tourist lodge, bakery and more. A former golf course is now a pastureland for dairy cow. Annual revenues are $3 million with $250,000 profit, put right back into the community.

The Tenors — which also includes Remigio Pereira and Fraser Walters — give back to other causes wherever possible. Last September, the group joined Divine Brown, Young Stitch and others in performance at Toronto’s Air Canada Cantre as part of We Day, the annual "youth empowerment" events held across Canada supporting Free The Children, Canadian activist Craig Kielburger's international charity and youth advocacy movement.

“Any time they call we answer,” says Murray. “Performing our song ‘Free the Children’ in Toronto recently with Divine Brown and Young Stitch [at We Day] was a really special moment. We’ve seen firsthand the difference Free the Children makes.”