After Sammy Hagar sold 80 percent of his Cabo Wabo Tequila business in 2007 to Gruppo Campari for $80 million, the rock singer and his wife started The Hagar Family Foundation, a private non-profit which eliminates much of the red tape that can hamper funds getting quickly to the people and charities that need them.

From Blessings in a Backpack’s St. Louis chapter, which provides take-home meals to disadvantaged kids over the weekends, to helping families with expenses for terminally ill children, Hagar and his family have a community philosophy to giving.

“That’s a problem with some of the big charitable organizations. They have billions of dollars in the bank sitting there. There are people that need immediate help. I’m a grassroots guy. The Hagar Family Foundation want to support door-to-door, instant. The day I write the cheque; the next day I want to have someone benefit from it.”

Among the unique initiatives Hagar has launched are a chain of restaurants called Sammy’s Beach Bar and Grill, from which 100 percent of Hagar’s profits goes to The Hagar Family Foundation.

HMS Host, provider of the world’s largest food, beverage and retail services for travelers, has three airport locations with Hagar at Las Vegas’ McCarran International Airport, Maui’s Kahului Airport and New York’s John F. Kennedy International Airport. The other Sammy’s Beach Bar and Grill locations in partnership with Harrah Entertainment are at Harrah’s St. Louis Hotel and Casino, and one on the boardwalk at Bally’s Atlantic City in the summer time.

“I take every penny from these restaurants that I make and I give it to the foundation and we spread it around in the area where the restaurant is,” explains Hagar.  “So Maui is only in Maui, and Las Vegas, that money only goes to Las Vegas.  I go to local people. We have friends everywhere. So I’ll go to a friend of mine in Maui and I’ll say, ‘Hook me up with the local person that does the most charitable stuff and then I go talk to that guy and he goes, ‘There’s this family that …’ 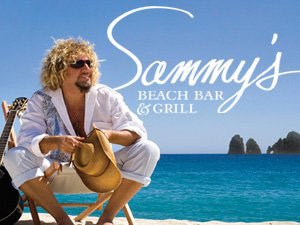 “So in Maui alone, we’ve assisted in two kidney transplants for poor families that couldn’t afford to do it. The state only provides so much help for some of these families. [We’ve done] a ton of other stuff.  I don’t even want to go into it. It’s heartbreaking when you see some of these things,” he continues. “A little nine-year-old boy, his dad was on a crack and he killed his mom right in front of him and then goes and kills himself. There’s this kid [alone now] and you can’t do enough for someone like that.”

Hagar says the restaurant chain doesn’t “make a big deal” out of its charitable mandate, even though patrons would likely choose Sammy’s Bar & Grill over another spot if they knew they were also doing some good while they were chowing down or having a drinking.

“I believe charitable work is not something you brag about,” Hagar says. “Host and Harrah, they contribute sometimes too, but every penny I get from the restaurant goes [to the Foundation] and I want one in every city.  People say how much money do you need? No no no, if I had one in every city we could help more people.”

The song that brought a tear to actor Ryan Reynolds' eye is now available for sale. “Whew! What a week it's been! The response to 'Canada Loves You Back,' the song I wrote in honour of Ryan Reynolds for last week's Governor General's Performing Arts Awards has been MUCH bigger than I'd anticipated,” singer Steven Page posted on his Facebook. He added that many people have been asking for the song to be added to Spotify or Apple Music or other streaming services and he raced to oblige. “I decided to donate the streaming and downloading proceeds to Reconciliation Canada, one of the many great charities that Ryan supports,” wrote Page. Buy it here. — Karen Bliss