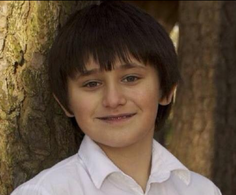 Fine artist Paul Richmond, co-founder of the art-as-therapy anti-bullying You Will Rise Project, identified with Michael Morones, the 11-year-old fan of TV cartoon My Little Pony who in January attempted suicide by hanging because of relentless bullying. As a child Richmond was teased for his love of Snow White and the Seven Dwarfs.

While Morones recovered at Levine Children’s Hospital in Charlotte, N.C, in February the Ohio-based Richmond started the Art for Michael initiative featuring My Little Pony-inspired artwork on the You Will Rise website. Since it launched, Art for Michael has received more than 300 submissions, including drawings, paintings and poems for the bullied boy.

“I thought that it would be a great opportunity to do something for Michael and also for his family to show support for what they’re going through, as well as making a statement to other kids who may be feeling the same way,” Richmond, 34, tells Samaritanmag.  “Michael felt very isolated. If only he knew that there were so many other people out there who shared his love and would celebrate that with him.”

Submissions for Art for Michael are due on April 30. All the collected work will be printed in a hardbound book and sent to the Morones family. Although Michael was in a coma with a brain injury, he is breathing on his own and has started to move his arms and balance his head (his parents posted a video showing his progress). He is expected to go home on March 25.

“When I was a kid, I was in love with the cartoon Snow White and the Seven Dwarfs, so I related to someone connecting to something that isn’t typical of their gender,” Richmond explains. “I got made fun for it, as well, but I had a great art teacher who really helped me channel a lot of my own feelings into art.”

That teacher was Linda Regula, a visual artist who started working with Richmond when he just three years old. Richmond was an avid drawer. By age 4, Richmond says he was doing oil paintings on canvas.

Although Richmond experienced heavy bullying as he moved into middle school, the artistic outlet Regula gave him helped him cope with misery as a young teenager.

“I was just terrified to go to school some days,” he says. “I didn’t know what ‘gay’ meant yet at the time, but others kids certainly perceived that there was something very different about me. When I look back on that time, I wonder why I didn’t become one of those statistics, the kids who have killed themselves. I honestly do attribute it to having that creative outlet.”

Richmond and Regula formed You Will Rise in April 2011. The project was originally an online forum with a Facebook page where people could submit artwork that, Richmond says, “tackle the issue of bullying from every possible perspective, not just from victims of bullying but bystanders and family members of kids who have experienced bullying.”

A few months later, one of the kids sent their artwork to singer Adam Lambert, who re-tweeted their post. The next day, over 100 submissions came to the online portal. Since then, Richmond says not a day goes by without a kid or adult sending work to You Will Rise’s website.

You Will Rise encourages kids who had been bullied to release their feelings through artwork. Richmond and Regula, as well as a small team from the community, put up any artwork they receive (via email through the site), no matter how dark the content.

“First of all, we're honored that you're interested in sharing your work with us,” it reads on the submission page. “The main goal of this project is to show people that even when bullies try to take it away, you still have a voice. Art can be very healing, and a powerful way of communicating with others who may find themselves in similar circumstances. So thank you for being brave enough to speak out and join our artistic community.

“We are looking for artwork (any medium -- paintings, drawings, comics, sculpture, performance), stories (500 words or less), poetry, song lyrics, videos, or any other creative expressions that represent some aspect of your experience with bullies. We ask only that you be truthful and real. No corrections or alterations will be made to your work.”

There are some submission instructions, ensuring the artists include a title, description if they want and if they would like to remain anonymous.

“People are constantly stunned by the intensity of the artwork on our site,” Richmond says, referring to pages separate from the Art for Michael collection. “A lot of it is very dark. I think for some of these kids, going to school every day is very much like walking that gauntlet. You don’t know what’s going to happen. It’s a scary situation.”

Morones’ mother, Tiffany Morones-Suttle, contacted Richmond in early March. Morones-Suttle told him that her family know about Art for Michael and go onto the site every day to look at the submissions.

“They [visit the website] just to know that there are so many people who were touched by Michael’s story and really want to do something for him,” Richmond says. “She said it’s her real hope that [Michael] will recover to the point that he’ll understand it and appreciate it.”

Morones-Suttle and Michael’s brothers plan to send in art for the book, as do Richmond, Regula and other members of You Will Rise’s staff.

Several submissions to Art for Michael have drawings of Pinkie Pie, a pony that is Michael’s favourite and has an excitable personality. Members of the My Little Pony cast even recorded personal messages for the “brony,” a term for male enthusiasts of the show, and asked his parents to play them for him when he gets better.

There is also a dedicated web page and Facebook page, in addition to the Michael Morones Recovery Fund on gofundme.com, which has raised more than $73,000 to pay for hospital bills. His family is now looking for a van than can transport a wheelchair, as well as other medical needs like long-term care.

You Will Rise is not the only form of support and charity the Morones family receives. Several tattoo parlors across the United States are donating proceeds from My Little Pony tattoos to his family. The money is also going to help his family launch a non-profit foundation in Morones’s name. The Michael Morones Foundation hopes to lead the fight against bullying and educate communities about ways to prevent bullying and foster more inclusion among neglected youth.

On their front, You Will Rise conducted a workshop last year at the Columbus Museum of Art. The organization invited high-school students who were victims of bullying — some had attempted suicide, Richmond says —  to create art about their experiences. At the end of the workshop, You Will Rise held an exhibit of their artwork.

“When they first came into the studio, they all looked down; they went to the furthest corners [of the room],” Richmond says. “These are kids who basically have been raised to be afraid of their peers. By the second week, they were all chatting and forming friendships.”

Richmond also volunteers with local art classes and works with the Kaleidoscope Youth Center, an organization serving LGBT teens in Columbus. Richmond says he is working now to launch a program with the Columbus College of Art and Design, training college students to be mentors for the high-school aged kids who were part of his workshop.

“The whole project was inspired by the mentorship that Linda gave to me,” he says. “We want to inspire others not only to create art and reap the benefits of sharing that art but to pay it forward by serving as mentors for the next wave of kids.”