3.3 Billion Ways To Change The World

“I’m focusing on making the education system have more female examples in the history books,” 19-year-old Anwar Basunbul, the G(irls) 20 Summit delegate from Saudi Arabia, tells Samaritanmag over Skype. “Because if you want to change the culture and tradition, you have to change the mentality of the new generation, so they can grow up believing that men are like women and women are like men. We can work. We can do whatever they’re doing.”

The G(irls)20 Summit — the tagline for which is “3.3 billion ways to change the world” — was created by The Belinda Stronach Foundation and executed with more than 40 international partners to raise awareness among G20 leaders about the pivotal role girls and women play in ensuring economic productivity.

“At the G20 table, there aren’t that many women and, all round, when these type of summits happen women are often underrepresented,” says Canadian delegate Leah Clare Stuart-Sheppard, 19.  “To represent that half of the population, or slightly more than half of the population, it’s important to bring the voice of women and girls to the table and acknowledge a lot of the challenges and obstacles women still face and the benefits that women can bring to their community.”

On the first day, the G(irls) 20 reps assembled at the University of Toronto’s Rotman School of Management to discuss education, child maternal health and economic opportunity for girls and women. On the 16th, they met with the federal, provincial and territorial ministers responsible for the status of women, at Spendido Bar & Grill. 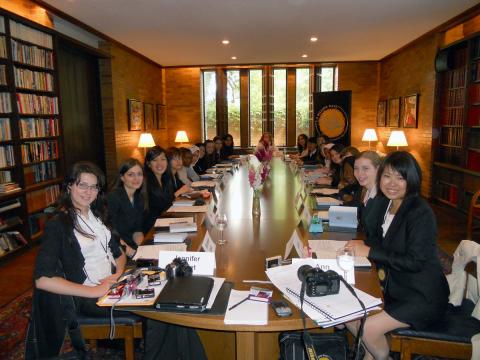 “I definitely wanted to be there,” says Basunbul, an architectural student at Effat University in Jeddah, Saudi Arabia, who was told about the G(irls) 20 Summit by her department head, Dr. Mervat Alshafie.  “I had these ideas in my country, but I never had a chance to express them. I thought being in the summit would be a way to be heard and share my voice with the other delegates to make a change.  I believe [females] in my community have great potential to be whoever they want to be and be a leader and achieve great things. They just don’t have the chance yet, so being a voice for these girls would accomplish a lot.” Though worlds apart, the Canadian delegate Leah Clare Stuart-Sheppard, also 19, shares similar views.  “There needs to be more room for youth involvement in so many different organizations, businesses and the government, everything, because it’s such a missed opportunity if you’re letting all this knowledge and energy and enthusiasm just sit there,” says the University of Ottawa student, who's studying international development and globalization.

“It’s important to find ways of empowering youth and getting them to speak up and be the change they want to be because, really, they’re going to have to at some point and there’s no reason for it not to happen now.”

The delegates’ ideas did not end in Toronto. The two that Samaritanmag spoke with have continued to work in their home countries on projects dealing with changing the education system so that women and men are treated equally.

Stuart-Sheppard had already started an Ottawa chapter of the Canada Mathare Education Trust, an organization that raises money to provide secondary school scholarship for students in Kenya, and will spend the month of August there.

“Secondary school isn’t free in Kenya unlike primary schools,” she explains. “Many kids particularly from the slum environment get through primary school, but they can’t afford to continue going to school. The scholarship helps them continue their education. We also work to raise awareness here in Canada about education and urban poverty in Kenya.”

Basunbul returned to Saudi Arabia inspired by G(irls) 20 and determined to make a difference at home.   “I felt like my ideas are good ideas; a summit in Canada heard me so why not in my country?” she says. “I started to get a lot of attention back home; people wanted to hear what I did there, what were my ideas. It was great to be recognized and have a chance to express my ideas.

“Also, being at the summit and inspiring other girls is something I can do at my age. I hope I’ve inspired other young girls in my country to participate and speak up and have a voice also, to change the world. I would like for all the women in my country who want to join the work force, to be the leader, to have this chance.

“For now, the first step I’m doing is to get support from change-makers and any organization that supports women’s rights in my country to help me present my ideas for the project and from this summit to help my community. But now I’m just trying to search and get all the support I can to continue with this project. We have to change the mentality of the young people and I think we can do that by changing the education system and making it more sensitive to genders." On the G(irls) 20 Summit web site, www.girlsandwomen.com, it states that the delegates from this inaugural think-tank “will reconvene prior to next year’s G20 Summit in France. This is the start of a global conversation about the economic prowess of girls and women and our commitment to creating a space where girls’ voices can be heard globally.” PEACEMINUSONE x Nike nike zoom air insoles for shoes amazon "Para-Noise 2.0"