Fifteen-year-old Bella Black is not only making a difference: she’s baking a difference. For 10 years, she has been hosting Bella's Bake Sale in Toronto on her family’s driveway in their Beaches neighbourhood, selling cupcakes, cookies and other pastries in order to raise over $100,000 to build schools in developing countries, via WE Charity.

Now, she’s launching her most ambitious project: To commemorate her 10th year of philanthropy and being in Grade 10, the Malvern Collegiate Institute student has initiated The Big Ten campaign. Her goal is to raise enough money over a single school year to finance the construction of 10 schoolhouses, which cost $10,000 each.

She holds her bake sale two weeks after the school year begins but continues to “sell” virtual cupcakes via donation on her web site, issuing a tax receipt for $10 or more.

“I want people to settle in first at school, then when I announce the bake sale and that I am raising money for kids who don’t have a school to go to, it hits hard,” Black, one smart cookie, tells Samaritanmag.

So far, Black, who only just turned 15 on Dec. 26, has financed the construction of four schools in Kenya (one through a program called Change Heroes), two in India, two in Haiti, one in Nicaragua and one in rural China.

Black held her first bake sale at the age of 5, inspired by the book It Takes A Child by Craig Kielburger, the human rights activist and co-founder of WE Charity and social enterprise Me To We. The international Toronto-based organization and educational partner, formerly known as Free The Children, implements programs in Asia, Africa and Latin America.

“I really wanted to get involved, and at the back of the book was a page suggesting all the ways people could help make a difference,”  says Black. “My family is Greek and baking is a pretty big thing in our culture. I loved to bake back then, so I suggested a bake sale  and it’s taken off from there.”

Has it ever: Robin Hood Flour – one of WE’s corporate sponsors for WE Bake for Change – once sent her across Canada on a “really fun” tour to promote their Bake for Change campaign. Black came to their attention when they sponsored a Guinness World Record event at Toronto’s Brickworks where she and a bunch of kids created the planet’s largest cookie mosaic, which was then parcelled off and sold to raise even more funds for building schools.

“WE is the record holder, not me. I was a participant as were other kids. We all helped build out the cookie mosaic,” says Black. “I had a bit of a bigger role in that I did press. I really enjoyed the day so much. It was because of my quirky and fun press interviews that Robin Hood thought of the campaign. I was around 11 at the time. A representative from Guinness was there to watch the process and measure out the final result. At the end, reps from Robin Hood and WE accepted the recognition of setting a world record.”

As Bella’s Bake Sales have grown in scope,  she’s traveled to various schools and given inspiring lectures on how she started her annual event…how to make a difference - and to encourage and show kids how they can do the same.

“The community and all the schools that I‘ve been to, including my high school — there’s a ME to WE Club there — and a lot of teachers show their support,” Black explains. “A lot of my neighbours and the community get together and even bake stuff for the bake sales.”

For  The Big Ten campaign, to meet the challenge of raising $100,000 in the school year, Black has a plan.

“I’m looking at major companies, mostly homebuilders, who are big in developing and building schools. I hope that they can  pitch in some money and help build the 10 schools, essentially.”

So far, The Big Ten campaign has secured $20,000, via a combination of bake sales and corporate donations. A true pro, Black also created a custom-designed slide show to present to companies she thinks will be able to help her cause.

“We’ve gotten a lot of great interest and that’s really amazing,” she says. “I have contacted a number of developers and large corporations. I have to wait to announce them.”

Why is she so passionate about building schools?

“I just want every kid – all the children in the world – to receive an education. We live in a world today where I just want to bring happiness in such a dark time,” Black says. “Just seeing people happy and seeing the community come together to help raise money, to help bake a difference for such a great cause just puts a smile on my face. Everyone should pitch together to help do something good in the world.”

Even though she’s been immensely successful at this venture, Black isn’t sure if this will be a lifelong pursuit for her. 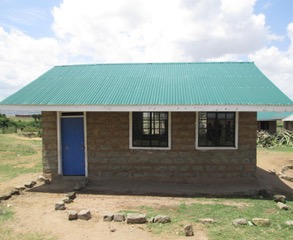 “I want to write books,” she declares.  “Fiction. I write every day and participate and in an online writing community where we create characters and write the story in real time. I would love to be a writing professionally. So this [bake sale] is something that I’d like to hand over to the next generation.”

However, she’s also receptive to offering a permanent retail spot, a non-profit Bella’s Bake Shop, where all proceeds go to building more schools -  and maybe not just in locations across the Atlantic and Pacific Oceans.

“WE is branching off to build indigenous schools for youth, so I’d love to get into that,” Black says.

And, there is one other dream she’d love to fulfill: even though Black’s largesse has enabled hundreds of children in developing nations to enjoy an education they more than likely would have foregone without her intervention, the student herself has yet to personally visit and see what her funding has built.

“I would love to go visit them. I actually had an offer to go see them when I was little, but I wasn’t of age yet for the vaccines I needed. But I’m really looking forward to visiting them.

(Please support Samaritanmag's original journalism by making a PayPal contribution or EMT transfer using  info@samaritanmag.com so we can increase the amount of content and writers we hire. Samaritanmag is the anti-tabloid, covering good people trying to change bad things. Let's make this thing bigger than TMZ.)