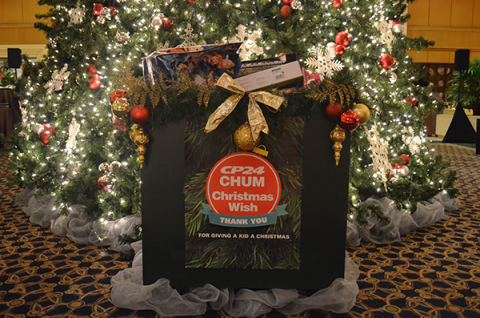 “We’re actually pushing on the air on the radio stations for fans coming down to see the show that they can kill two birds with one stone and go out and pick up a [new] unwrapped toy for a needy child in the community,” Rob Farina, Bell Media’s head of radio content, strategy, and iHeartRadio Canada, tells Samaritanmag.

“We’re going to be set up at all the entrances around the ACC. We’ve got our CP24 CHUM Christmas Wish elves out in full force.  We are not taking cash donations because there’s security and logistical issues so were only taking toy donations. There is an online link for people that want to make a cash donation.”

The annual toy drive has been going in Toronto for 51 years.

People can also text the word “WISH” to 30333 to make a $10 donation.  All financial donations of $20 or more are eligible for an income tax receipt.

The CP24 CHUM Christmas Wish provides a list of suggested toys per age category, under the "donations" tab. “There’s actually two sides that we always have a shortfall of,” says Farina. “Most people envision the 10-year-old in their minds, but the shortages we have year after year are the babies and toddlers, and teens. Invariably the cash donations have to go to support the need.”

The CP24 CHUM Christmas Wish was originally established in 1966 as CHUM’s Kid’s Crusade Foundation, for the purpose of assisting children in need and children’s charities, it states on its web site.  In 1973, the name was changed to the CHUM Charitable Foundation in order to broaden the scope of the foundation’s work, including the increase in requests for financial assistance from adults in need. In 2008, the program became known as the CP24 CHUM Christmas Wish.

“This is a gargantuan undertaking, I know from my years at CHUM,” Farina says. “We still do it at the station level to this day. We get everybody on staff to spend at least one day at the warehouse filling orders. The way that works is usually the community groups submit an order saying, [for example], ‘We have five foster kids, three male, two female. Here are the ages,’ and we fill orders. One of the most fulfilling things that I’ve ever done is spend a few days in that warehouse pulling toys for to fill these orders.”

Sponsored by the Ontario Subaru Dealers, Loyalty One volunteers wearing Santa hats will be stationed at all entrances to the Air Canada Centre.  The donation drop-off activation features a Subaru Forester AWD SUV filled with toys, as well as large toy boxes located at Gates 1, 2, 4, and 6.