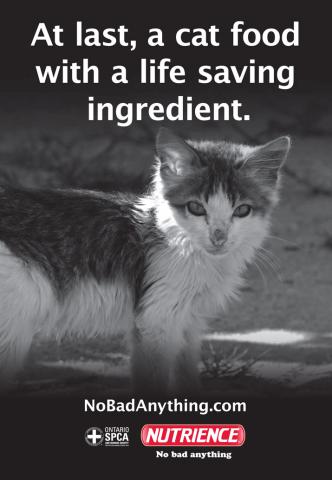 It’s hard to imagine a gutsier or more provocative campaign than the one currently being executed by pet food manufacturer Nutrience, via ads posted on Toronto transit shelters and TTC vehicles citywide.

You’ll know the poster if you’ve seen it: a filthy, scrawny, destitute kitten photographed in stark black-and-white under the wording, “At last, a cat food with a life saving ingredient” and a call to action to visit nobadanything.com.

An alternate poster shows a similarly bedraggled and almost visibly sad-looking dog; both images are at once heartbreaking and utterly arresting.

Go to the site listed, and you’ll be met by a brief video which at first seems amusing until the message kicks in: stuffed dogs and cats featured in the clip are filling in for real ones, and are illustrating the kind of abuse suffered by pets (being kicked, locked up, left outdoors, etc…) at the hands of ruthless and/or thoughtless owners.

As the plaintive, piano-driven ballad, “Wrapped up in Love," — written specifically for the campaign by local singer Jeannette Dupuis‏ — softly plays, the message “Stop bad things happening to good pets” flickers on the screen.

That’s when it hits you: this campaign is being shepherded by a pet food company, normally the purveyors of warm, fuzzy, anthropomorphic images. It also means that members (hopefully a scarce few) of Nutrience’s customer base might see themselves and their behavior depicted in the advertisement.

Needless to say, the reaction to the campaign, which launched mid-June, has been mixed.

It was House who came up with the No Bad Anything campaign idea which, in addition to spotlighting the plight of abused pets, is also donating food to local shelters nationwide as part of its broader campaign pledge, hence the “food with a life saving ingredient” tagline.

“A few people have written in to thank and congratulate us,” House adds, “and we’ve had people saying that the campaign is over-the-top. But that’s fine; at least people are noticing and that’s really the key thing.”

House continues: “It’s one of those things where the reality is harsh. We don’t want to overdramatize things but if something [like pet abuse] is real, it’s worth showing and talking about. We’ve seen this through the Ontario SPCA and we work with them and get their approval on all these images.

“The main reasons we used stuffed animals in the clip instead of real animals is that it would have been just too dramatic. But people are smart enough to get it,” House says. “In the end of the spot where one of the stuffed toys turns into a real dog, people know we’re talking about real animals. It also takes a few views to really puzzle the spot out, which we hope will make it more viral.”

At the nobadanything.com site (the verbiage doubles as a slogan for the company’s food which contains no by-products), visitors are encouraged to “make the pledge” and add their names to a list, join the OSPCA’s online community and to share news of the campaign with their friends via Facebook.

If 5,000 people “make the pledge” by the campaign’s end in mid-September, Nutrience will donate $500 worth of pet food to 10 pre-selected animal shelters across Canada.

There is also a contest component: customers who purchase specially marked bags of Nutrience and enter a pin number on the package are eligible to win a $1,000 food donation to the animal rescue of their choice and a one-year supply of Nutrience for their pet. The site also offers a downloadable $5-off coupon.

“And when consumers purchase a bag of specially marked dry pet food that bears a sticker with this dog or cat icon, they’ll also receive a free can of food and a free bag of treats,” adds Eric Marquis, trade marketing operations manager with Rolf C. Hagen Inc.

This current “Stop bad things happening to good pets” campaign is the second short-term effort Nutrience has run this year; a Facebook-themed one ran from March to May, also online and on transit shelters. It specifically benefitted the OSPCA via a donation of $5 for every specially marked package of Nutrience food purchased where the consumer also registered a pin number.

Both complement the company’s ongoing altruism. In just the past five years, Nutrience and Rolf C. Hagen Inc. have donated over $1 million in food and supplies to rescues and animal causes across Canada.

Plus, the company provided a specially outfitted emergency response trailer to the OSPCA, which can be used for animal rescue. It also fed 500 dogs for three months when they were rescued from a Quebec-based commercial breeding organization (read: puppy mill) last year and placed in the care of Humane Society International.

“We’ve always been good at giving money and giving food,” Marquis says. “We’ve done it for years. And although we are a global company with over 2,000 employees, we still run this company like a family-owned company, which it is and has been since 1955. We are all animal people who want to give back in a big way. But to be honest, we’ve just never been that good at telling people the story of our work.

“And while we like to give to the bigger shelters also, we try to also work with smaller shelters that really, really need the help and are often operated grassroots by die-hard animal lovers who will shelter anything that comes their way.”

That explains why relatively tiny shelters such as Teja's Animal Refuge in Glen Robertson, ON and the Hervey Foundation for Cats in Stony Plain, AB are among the 10 shelters shortlisted for potential food donations in the current No Bad Anything campaign.

“Nutrience has over 14,000 fans on Facebook so hopefully people will recognize the good work we are trying to do,” Marquis says, “and they’ll recognize we are hoping bring awareness to this issue.

“Even though we live in Canada, we’re still seeing animal neglect and abuse. And we know people find the image of the dog and cat on those posters very grim. Believe me – we’ve heard about it. But this is the reality, and we are prepared to deal with the controversy if we can also help deal with this issue.

“You know, once consumers sign up for the pledge they’ll get the coupon but there really is nothing in it for us more than just helping to spread the word about these amazing shelters… and the fact that this stuff goes on,” Marquis says. “We’re very hopeful people latch onto this and that they see the good in this.”