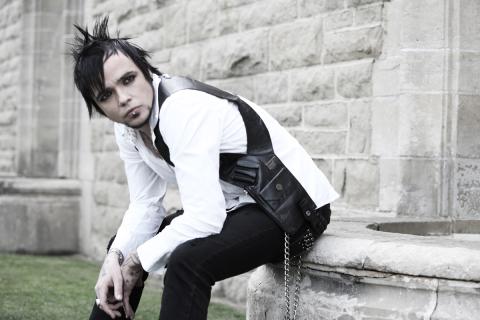 Lukas Rossi, who has maintained a dedicated fan base since winning the TV talent search Rock Star: Supernova in 2006, charges $500 to have dinner with him, but it’s not a sneaky way to get a fancy meal on the road.

“It has been a tradition for Lukas to have a dinner with a fan for the purpose of a one-on-one encounter and to help charities with a portion of the value of the dinner,” it says on the Canadian rock singer’s web site, www.lukasrossionline.com.

“It’s on a first-come first-serve basis,” his co-manager Melissa Kramer tells Samaritanmag.  “The charities are rotated amongst several charities.”

The dinners are sold on the site via PayPal. There is also a list of charities on his “Charity for Change” page that Rossi — and his fans — have supported, noting the exact amount donated for each.

Some of the donations are made from an auction and some directly by fans.

“I like it to be more of what they want it to go to,” says Rossi, sitting at an Indian restaurant before his Toronto show [the dinner auction did not sell]. He now lives in Nashville.

“My father lost his eye sight and there was a lady who picked cancer. What am I going to say, ‘No, we’re going to give this portion to [the Assistance Dog Institute]’? All of those charities, how we picked them is basically everyone on my team that’s very dear to me has been affected in some way by them.”

For $500, each buyer gets a one-on-one dinner with Rossi at a local restaurant; admission to the show; a meet and greet after and the choice of one of his CDs. Obviously, a person willing to spend five bills on dinner with him is a super fan, but so far Rossi hasn’t encountered any nuts or anyone overly fawning.

“I’ve never had one where I’ve been uncomfortable, like ‘Whoa, get me outta here,’” says Rossi. “Maybe if I was a bit of an ass, I would have a crazy person, but I’m just chill. I think if they can connect with my music, then they sure as hell can connect with me on a person to person level.”

Through the dinners and other auctioned items, Kramer estimates Rossi has raised around $15,000 for charity over the course of two-and-half, three years.

“It let’s me and my team know that we’re doing something good, bettering this planet because I’ve done a lot of bad sh*t in my life and multiply that by the rest of us crazy f**kers, it’s not really getting any better,” says Rossi, “but we can do our part.”

Not every auction or VIP package has a charitable angle, such as the $50 meet and greet tickets.  If it doesn’t specify that it does, then the money goes to tour support.