Milwaukee, Wisc.-based singer, songwriter and musician Dean Schlabowske has been donating a portion of the tip proceeds from his live stream performances to Feeding America to this point, but Toronto’s Horseshoe Tavern and five other live music venues will receive all of the money from his June 16 to 21 virtual tour.

Schlabowske began his music career in 1988 with indie rock band Wreck. He’s since been an integral part of Dollar Store, Deano and The Purvs, Ice Cold Singles, TV White and, most notably, alternative country/rock-and-roll band The Waco Brothers.

Schlabowske also records protest folk music and tours under the name Ramblin’ Deano. His most recent album, Ramblin’ Deano And His Enablers’ Pills, Puppies and Bacon, was recorded with Tamineh Gueramy and Jeff MacNeil and released earlier this year.

Schlabowske performed his first solo Sunday morning “brunch stream” on his Facebook page shortly after the covid-19 economic lockdown began. His wife Jo Walston, the former singer for Austin, Texas-based alternative country bluegrass band The Meat Purveyors, has joined him for three since. Their last one featured all Hank Williams songs.

Schlabowske also performs three songs each weekday morning at 10 a.m. ET during something he calls “Ramblin’ Deano’s Coffee and a Song.”

“Both brunch and morning were kind of intentional because they seemed like times when I could maybe get people’s attention,” Schlabowske tells Samaritanmag. “There weren’t a whole lot of people who were a lot better known than I am live-streaming at the same time.”

In addition to making music, Schlabowske is a wine expert who normally offers recommendations at Downer Ave Wine and Spirits. Though he hasn’t worked for two-and-a-half months, he said he didn’t feel right about pocketing all of the money he receives in his online tip jar for his shows.

That’s why he elected to donate between 10 and 15 percent of those proceeds to Feeding America, a United States-based non-profit organization that has a nationwide network of more than 200 food banks that feed more than 46 million people through food pantries, soup kitchens, shelters and other community-based agencies.

“They’re one of the good ones,” says Schlabowske. “Ninety-some per cent of everything that gets taken in goes out to people in need.  You look into some of these charities and 40 per cent goes to administrative expenses. It’s good to investigate these things if you’re going to give.”

While Schlabowske isn’t getting rich off his live stream income, he’s been able to donate about $700 to Feeding America so far and is grateful for what he’s both earned and learned from the experience.

“Interest will probably wane if we get to a point where people are back at work and going to clubs and whatnot, but I feel like it’s forced me to learn about a lot of other valuable tools for the independent musician’s tool kit. Even if the amount of money I take in for online content gets reduced to one-fifth of what it is while everybody’s stuck at home, that’s still a little chunk of money I make each month as a musician in an era where those revenue streams are few and far between.”

Schlabowske will make another contribution to Feeding America soon, and he doesn’t foresee stopping for a while.

“Who knows when the pandemic is going to end, and my country is so ridiculously anxious to open everything up that I’m sure we’re going to see another spike again and there’s going to be another round of business closures and more people out of work," he says. “It’s going to be a nightmare. Evictions are going to start happening next week because the moratorium on those will be expired in most states. I see darker days ahead, as dark as it’s been, so I’m sure I’ll have the opportunity to give more.” 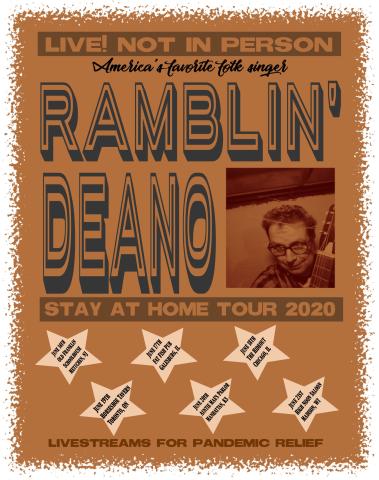 Since touring has been such a big part of Schlabowske’s life for more than 30 years, he appreciates how important independent live venues are to both musicians and the people who work at them. Most of these places have been closed for going on three months due to government-mandated covid-19 lockdowns, and some may not open again this year — if ever.

“Whatever I could do to help, I wanted to do,” says Schlabowske. “And I’ll be straight with you, this is not an entirely selfless exercise because I’ve been trying to find ways to expand the audience for my morning show, and this gives me a chance to do something in association with these popular venues where they will promote something I’m doing and maybe I can make a few more connections with people who might not know about what I’m doing.

“It’s kind of a win-win for me. It’s a lot of effort, but I’m hoping that the clubs will come out of it a little better and so will I.”

Schlabowske reached out to some of his favourite venues and a few contacted him when they learned about his plan to play a series of shows he’s dubbed the “Live! Not In Person Ramblin’ Deano Stay At Home Tour 2020.” He’ll give the money donated for each live stream to the designated venue for that night to help pay bills and give employees a small bonus.

“The nice thing about this that’s different from my daily content is that it’s like a real tour because, in theory, I’ll be playing to different audiences,” says Schlabowske. “I can play some of the same material so I don’t have to play an hour-long set that’s different six nights in a row. But I did decide to feature my songs from each of the six Waco Brothers records — a different album each night, so if there are fans who want to tune into multiple shows they won’t get the same set.”

The schedule, including the date, time, featured venue and Waco Brothers album, is:

Horseshoe Tavern Is A Special Place

While it may be a surprise to see a Canadian club on the list, Schlabowske says Toronto and the Horseshoe are very special places for the Waco Brothers.

Schlabowske and fellow Waco Brother Jon Langford have played two separate shows each at the home of Horseshoe owner Jeff Cohen and his wife Tara. The band members have also got to know some of the bar’s staff and have made several friends in Toronto.

“It’s the relationship with ownership and so many of the people at the club,” says Schlabowske. “The Horseshoe is a special venue because JC (Cohen) and Craig (Laskey), after seeing us one year at South by Southwest, pursued us to come and play there and have been bringing us back ever since and are always doing everything they can to accommodate us.

“The Horseshoe is still to date the only club where we’ve driven up to the load-in door and they had posted what our set list would be that night. That’s how big of fans they are.

“I know that things in Canada are a little different than here and that your government is paying employees 75 percent of their salaries, as I understand, rather than our typical fucked-up system where I haven’t received a penny in unemployment and they’re investigating my previous employment — as if fraud is the most important thing they should be worrying about right now when 40 million people are out of work.

“So even though I know to a certain extent the employees are being taken care of, I also know that 75 percent isn’t 100 per cent and that they’re left holding the bag on all of the bills that have to be paid just for the building.”

(Please support Samaritanmag's original journalism by making a PayPal contribution or EMT transfer using  info@samaritanmag.com so we can increase the amount of content and writers we hire. Samaritanmag is the anti-tabloid, covering good people trying to change bad things. Let's make this thing bigger than TMZ.)