Movember Moustache Style Guide: What You Need To Know Before You Start To Grow

We're rapidly approaching Nov. 1 on the calendar. Which means it's time once again for men everywhere to shelve their razors in the pursuit of righteous Movember moustaches.

Begun in Melbourne, Australia in 2003 by Adam Garone and some pals, growing a Movember moustache is now a charitable initiative that men all around the world take up each year. These Mo Bros know how to fundraise, too. In 2013 Canadian alone Movemberists raised nearly $34 million towards men's health causes like prostate and testicular cancer research.

"We seek to make a global contribution to men living happier, healthier, longer lives. This ambition underpins everything we do. It is the driving force behind our campaigns, funding strategy, and vision for the future," states the organization on the Movember Canada website.

Committing to growing a moustache for Movember is all well and good. But an entirely 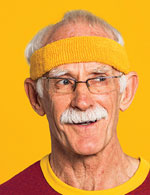 more difficult and complicated question awaits those participants who decide to let their face fuzz fly — what kind of moustache should they grow? Like, do they go for the walrus and hope it makes them look smart like Einstein? Or maybe they're a sexy MF and want to pursue a pencil moustache like Prince?

The American Mustache Institute lists 13 different types of 'staches like the Dali, the fu manchu and the painter's brush in their official style guide, which all makes for some difficult decision making.

While the choice of which soup strainer to sport is an intensely personal one, Samaritanmag enlisted Zach D, one of the founders of the Toronto Facial Hair Club (a member chapter of Beard Team Canada) and man with, by his own admission "a big, honkin' moustache," to give aspiring whiskerers some real talk on what it's going to take to sport a proper moustache.

On Oct. 31, men all over the world are going to start growing moustaches. What's most important thing to know, knowing you've got 30 days to look good and sharp. What's the plan of attack?
Zach D: People aren't going to like this, but the most important thing to know is that you're not going to grow a decent moustache in 30 days. Some people get a better start than others, but you've got to give it a little more time than than that beyond November if you're going to do it properly.

So, what's a good length of time? Three months?
Yeah, you'll probably know at the end of one month whether you're capable of it or not, but at three months you'll start to be able to do more with it as far as styling and doing more things in that regard. You'll see what suits your face or what look you like. It's hard in one month you're kind of just stuck with what you've got.

How much grooming goes into a well-maintained stache?
Well, with any facial hair you've got to comb it regularly and wash it once in awhile at least. And a lot of people use either waxes or oils or something like that. They have a huge variety of specifically marketed products for beards or moustaches. Some people use hair spray or they have their general purpose product, but there are a whole bunch of companies that specifically make moustache waxes and so on.

What's it like to walk around in public with a big, stylish moustache? What kind of reaction does it get?
I get a lot of different reactions and comments. Mostly positive. People on the street or subway will say "Awesome moustache! or whatever. I think it goes both ways a bit, though. There are a lot of historical figures with big moustaches that have been kind of questionable in their character, like Stalin. So some people get a bit of an angry or authoritarian vibe or whatever. But that's their problem not mine.

Now, all these guys that are going to go out and grow their Movember teen boy-level 'staches, when you guys look at them do you resent them as tourists? Or are you just glad they're trying to go for it?
Well, I don't think anyone thinks ill of Movember or the people who participate, at least anybody I know. I guess it depends on why you do it and if you stick with it or not. Y'know, there a people who are into it and even if they don't do it well it's still commendable, then there are people who are just jumping on the bandwagon. But as far as Movember goes, it's all good.

Any last piece of advice for someone trying to grow a solid moustache?
Ordinarily when someone's trying to go particularly styled facial hair I would tell them to just grow the beard and sculpt it later once the length is there. You can't really do that in Movember, so I dunno. Just don't touch the razor.