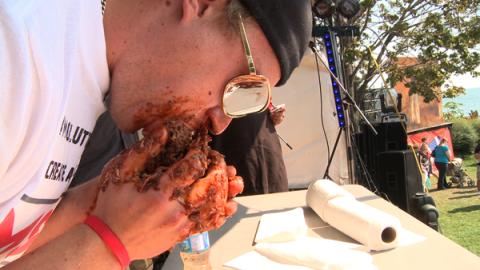 There’s an emotional moment near the end of the documentary The Story Of Furious Pete where competitive eater Peter Czerwinski wolfs down an estimated 10 lbs of ribs, hugs his mother and tearfully tells her, “All for you, mom, all for you.”

That might seem like a strange action to dedicate to your mother, but it was a stunt to raise money for the MS Society of Canada in her honour. She was diagnosed with multiple sclerosis, a degenerative disease of the central nervous system, eight years ago.

“I see my mother every day and to see her suffering with it, I’m an only child and she’s pretty much my best friend, and anything I can do to help her out and support the cause in any way, I’ll do,” Czerwinski tells Samaritanmag.

In The Story Of Furious Pete, which screens at Toronto’s Hot Docs festival (April 29 to May 9; check www.hotdocs.ca for dates/times), director George Tsioutsioulas captures his unique story from anorexic teen to champion competitive eater. In the film, Czerwinski, now 24, explains at a meeting with the Mississauga, Ontario, chapter of the MS Society, “My mom’s always been there for me. She helped me get through my illness. I want to help her.”

His first charity event for the MS Society was a little over a year ago on his own, before contacting the organization. “I actually ate every value meal off the McDonald’s menu in under 30 minutes,” he says.  “That was really bad. I was sick for three days after that.” He asked people to donate directly to the Society or to a dedicated PayPal account, then transferred the funds. He paid for the meals himself.

“You always have high goals and you don’t necessarily raise what you want,” says Czerwinski.

The stunt in the documentary took place on the main stage at Canada’s Largest Ribfest in Burlington, Ontario. There, for two hours, he and his mother personally approached individuals, clipboard in hand, asked for a $2 donation and for them to guess how long it will take him to eat 10 lbs of ribs. The prize was a catered barbeque by BBQ Naz, but all the toonies went to the MS Society.

Tsioutsioulas says he thinks It took Czerwinski 14 minutes to eat all the ribs, “but the problem was that the person who was supposed to weigh the ribs didn’t so it ended up being closer to 15 lbs of ribs. He’s a champ though; he finished it.”

Czerwinski doesn’t remember how much money was raised.  “It wasn’t an amount we wanted to even list. We didn’t have enough support. The MS Society promised a lot more people to come out to sell tickets for us and they didn’t get them. We raised 400 or 500 bucks that day.  Mostly it was to spread the message,” he explains. “The more people that see the film will see the message. That was the main goal.”

With the publicity The Story of Furious Pete is getting and Czerwinski himself, the masters student at McMaster University in Hamilton, Ontario, says he hopes future fundraising events for the MS Society will be more successful.

“The MS Society contacted me to see if I’m interested in doing more stuff because they said that it spreads a good message. If I can do more stunts; if I can do some talks or even bring my mom along; then sure. At the moment, I haven’t planned anything simply because of school getting in the way, but I’d be more than happy to do more, if people want to donate for stunts.”