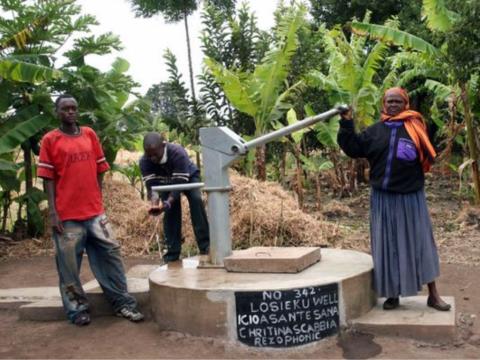 Cristina Scabbia, co-vocalist for Italian metal band Lacuna Coil, has a water well in her name in the Kajiado area of Kenya from her contribution to Rezophonic, an ambitious collaborative album, whose proceeds go to the world renown African Medical and Research Foundation (AMREF).

“Rezophonic is a musical project that involves more than a hundred artists from the underground, mainly the rock scene. Now it involves more people even from different scenes, even the very big Italian artists,” Scabbia tells Samaritanmag.com.

“I got a call from them the other day — because somebody else did a donation — and so far 122 wells have been built, which is amazing. Every well gives clear water to drink to 50 families so they don’t have to walk one day to get dirty water to bring back.”

Spearheaded by Mario Riso, an established Italian session drummer and co-founder of Rock TV in Italy, Rezophonic has released music, staged events and created merchandise. The funds raised are specifically allocated through AMREF to construct wells and extraction pumps in one of Africa’s driest regions.

“The [Rezophonic web] site is in Italian and I’m kind of pressing on the guy who is taking care of this to make a translation because I would love more people to get involved with it,” says Scabbia.

Recently, her band Lacuna Coil announced that anyone who purchases their sixth album, Dark Adrenaline, out January 24, through mymetalclub.com (a hub for metal music stores), proceeds from the sale will go to Rezophonic. The Metal Club Store edition is limited to 3000 units and features excusive artwork designed by the band’s bassist Marco Coti Zelati

As added incentive, if purchased early, buyers will receive an exclusive code to watch Lacuna Coil’s acoustic performance and Q&A for free on www.stagit.com on January 24 at 7 p.m. (EST), broadcast live from Vintage Vinyl in Fords, New Jersey.

Scabbia has been involved with Rezophonic for about five or six years.

The new album, Nell’aqua, just came out in November. “It means ‘in the water,’” she says. “It’s rock music, partly in Italian, partly in English. And on this album, Andrea [Ferro], our co-singer, the male singer in Lacuna Coil, and Maus, the guitar player [real name Marco Biazzi], and I are participating in the project.”

Lacuna Coil has been in a busy album-tour-album cycle the past few years. Its last album, Shallow Life, came out in 2009, and with the release of Dark Adrenaline, the band is heading out on the road two days later with Megadeth until February 28, with more touring after that. It leaves little time for Scabbia to go with Rezophonic or AMREF to Kajiado to see their work first-hand.

“They invited me twice, but I couldn’t go because I had to be on tour with Lacuna Coil, but I hope that one day I will be able to go,” she says. “They told me that it’s an experience that really changes your life. Just to see people that don’t have much to be happy about just being alive; I think it’s a mind-changing experience.

“I have a picture of my well because they gave a name of an artist who participated. It’s awesome. It’s funny because they wrote my name wrong [laughs].”