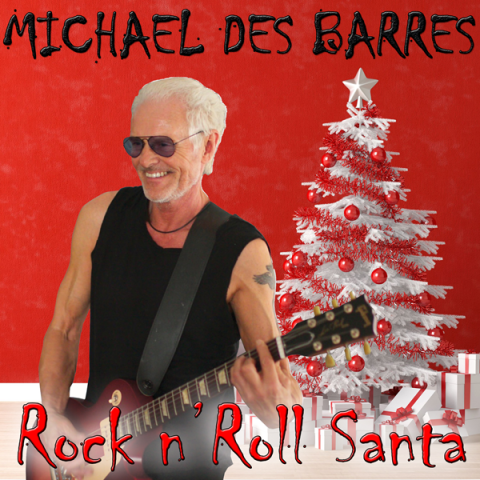 British rock singer-guitarist Michael Des Barres has written and recorded a fun song for the holiday season about Santa Claus on a health kick. Half the proceeds from all sales of "Rock N' Roll Santa" will go to Little Kids Rock, a nonprofit organization transforming children's lives by restoring and revitalizing music education in disadvantaged public schools across America. The song is available on iTunes, Amazon and CD Baby.

Des Barres, who is presently promoting a new album, Carnaby Street, has been rockin’ for more than 40 years. On his long and varied résumé, his band Detective was signed by Jimmy Page to Swan Song in the mid-70s; he toured as the frontman for The Power Station in the mid-80s; and wrote the worldwide No. 1 hit “Obsession” for Animotion.

He co-wrote “Rock N' Roll Santa” with his friend and collaborator Paul Ill, and cut it in Los Angeles at Psychedelic Shack studio. Des Barres also played all of the instruments on the track himself.

In the new holiday ditty, Des Barres sings: “Santa got skinny this Christmas time / Coming down the chimney is gonna be fine / Last year was tough all those cookies and stuff / Put out fruit plate, that’ll be enough / Santa looks great / Santa lost weight. He’s a rock n’ roll Santa and he’s getting in shape...”

The video (see below) shows a skinny Santa in his “work-out shoppe.”

“I did that gig with Springsteen in New York for Little Kids Rock, a benefit honouring Steve Van Zandt [with the Big Man of the Year award] to raise money to get instruments to these inner-city kids that can’t afford them,” Des Barres says of  the Oct. 16 “Right 2 Rock” concert at Hammerstein Ballroom that also featured Elvis Costello, Southside Johnny and Tom Morello. The event raised over $800,000, according to Little Kids Rock.

“I got on that [bill] and seeing these kids that are just massive, you know, the diet thing, the nutrition thing, is such an epidemic, that I wrote this thing about how Santa can actually come down the chimney this Christmas Eve. It’s terribly important.”

Next year, he hopes to have the proceeds go to an obesity program of some kind, such as Let’s Move, launched by First Lady Michelle Obama.

“I have other plans for next year, through the new, viral, digital world,” says Des Barres. “Albums are great, but songs are greater. Every song I’m gonna put out in the next year is gonna have some theme to it, some story, to be part of the solution, and not part of some pathetic party that you’re throwing for yourself. We have to start reconciling with each other and tolerating each other, not judging each other. I don’t want to sound pretentious about this, but I really want to be a part of a solution and not part of the problem.”