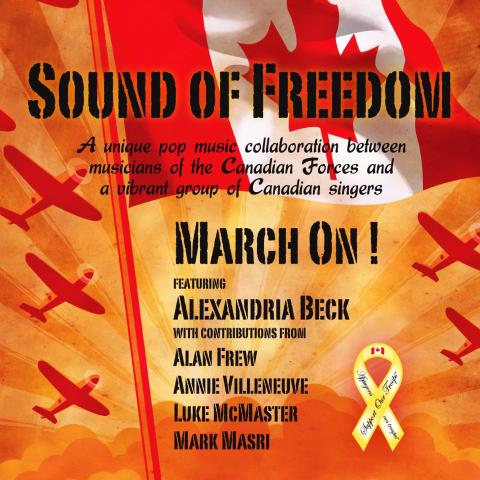 Many Canadian musicians who have gone over to Afghanistan to entertain the Canadian Armed Forces have returned with stories about the talented musicians they discovered in uniform. Sound of Freedom proves that point. Produced by Glass Tiger keyboardist Sam Reid, the fundraising album for The Canadian Forces Personnel and Family Support Services (CFPFSS) -- due May 29 on Willow Music/EMI Music Canada -- features collaborations between musician members of the Canadian Forces and civilian singers and musicians.  The band call themselves March On.

"It's a wonderful cause for the Sound Of Freedom CD to support," Reid tells Samaritanmag. "The Canadian Forces Personnel and Family Support Services is set up to handle the ongoing care for these soldiers. It could be help with the process of frequent relocations, which is tremendously difficult on families especially with small children in school, but also the real life challenges that soldiers meet when they come home from their deployment around the world.

"That could be rehabilitating efforts such as the Soldier On program, providing for soldiers with injuries or even the Operation Santa Claus program that provides a morale boost to troops by sending good will packages to them over the holidays. All of these programs and more fall under the umbrella of the CFPFSS's mandate.

"Not only will the album hopefully raise more funds, but it's also something the military musicians who performed on it can be proud of," Reid adds. "Certainly, it's one of the highlights in my career as a producer."

Reid has gone twice to Kandahar to entertain the troops, once with Glass Tiger in 2009 and again with Frew in 2010 and will return with Frew to Kabul this time in late June for Canada Day. By then, he will be HCol Sam Reid. On June 18, at an investiture ceremony, he is being made an Honorary Colonel of 8 Air Maintenance Squadron, which he will hold for three years.

He became involved with Sound of Freedom after receiving a call from Todd Kealey, national manager strategic communications for the Military Family Support Services, who was looking for songs.  "At the time, they had approved the concept of creating a special music release around one of their ex-military vocalist/performers, Alexandria Beck," says Reid. "They were looking for some 'pop' songs for her to sing with the central military band."

After the initial meeting with Kealey, Reid was asked to produce the project. "They wanted someone with a background in pop music that could help them pull this all together," Reid says. "Sounded like such a unique and special project so I agreed."

Reid then sent messages to his close friends, Frew and McMaster. They had just returned from a trip to Afghanistan together.

"It seemed like a great choice to have them involved, plus they had first hand experience of the importance of the work that the Family Support services did for the troops," explains Reid. "That's where I got the idea of having some other prominent Canadian vocalists join Alexandria and the military musicians to create a great pop band.

"The unique challenge was that they wanted a main stream pop record and not a typical military style recording with marches and traditional tunes. There have been some wonderful tribute recordings released from other artists in the music business who have joined together to thank the troops for their hard work. We wanted something a bit different from that."

Reid says he intentionally looked for songs that had a universal message so not only the civilian population but also soldiers in the military would listen to this record and be surprised at what their fellow soldiers had created. "I don't hear this as a military record at all," he says. "I just hear it as some great tunes being performed by some great musicians -- end of story."

The album was largely recorded at the Canadian Forces Central Band Studio in Ottawa and as well as Reid's studio, SlipOne Digital, in Newmarket, Ont. in 2010 and 2011.

"My first choice for a recording studio was my own facility in Newmarket, however the logistics involved with coordinating all the military musicians schedules meant that the primary tracking studio was located in Ottawa at an old WWII building near the airport that the central band used their main rehearsal facility," he says.

"Lucky for me that they actually had some great gear and the main audio engineer, Sgt. Steve Emberson, was really knowledgeable with the setup.  I also brought one of the main engineers from my studio, Ryan McCambridge, so we had a great team.

"Normally, this facility is used strictly for live band rehearsals so having us there for a few weeks as a closed session was a challenge. We worked the regular work hours that the military musicians keep so that meant an 8 a.m. start and wrap by 4 p.m. -- not exactly your regular rock band work schedule."

Just to underscore how many musicians are enlisted in the Canadian Forces, Kealey says in the "regular force" there are 245 full-time, professional musicians; in the Reserves, there are over a thousand. "Some reservists serve sporadically or at designated times in the year," he told Samaritanmag in an email. "Other reservists are with the Forces on a full-time, year-round basis. There's also a large number of additional people that are available to perform as musicians but they classified as 'volunteers' so they are not compensated for their casual participation. The total pool of people is something around 1500-2000 musicians."

Reid says it was a "treat" to have access to so many great players. "We even had a full 18-piece pipe and drum corp to perform the opening song, 'Hector the Hero.' That's really the only direct military style piece on the record. It also features an excerpt from General Walter Natynczyk, chief of the defense staff, that I recorded while in Afghanistan. He was giving a speech at the end of our trip to thank everyone for making the journey to Kandahar and during the speech a fighter jet took off on the nearby runway into the Afghan night sky -- drowning out his speech he waited for it to subside and then used the phrase 'sound of freedom.'

"I thought that was a perfect title for this release and got his permission to include the recording in the opening piece," says Reid.

The CFPFSS benefits programs such as the Soldier On Fund and Hospital Comforts Fund, Operation Santa Claus, the Canadian Forces Personnel Assistance Fund and the Military Families Fund. It is wholly dedicated to providing morale and welfare programs and services to military families and to serving and former Canadian Forces members, by helping them meet the specific challenges brought about by the conditions of their service.

For example, the Military Families Fund offers a wide range of support, including funding tutoring and home renovations for Canadian Forces members with special needs children to financial assistance for the relocation of those discharged for medical reasons.

"The Canadian military have a slogan, 'One Community, One Million Strong,' [which means] the total is made up of not only enlisted members but also includes reserves and civilian employees," says Reid. "At the heart of this massive operation is individual people, Canadian citizens who have made a choice to stand up and defend our nation. The cost of this dedication is high, not only in lost lives for soldiers fighting in remote places like Afghanistan but the enormous effort to look after these soldiers and their families when they come back from long tours of duty around the world and at home across Canada."

That, in essence, is what the album, Sound of Freedom, is about.