In elementary school, Bruce Cockburn remembers a teacher wishing upon her class that they all grow up to be “radicals,” a person intent on forcing change by uncompromising methods.

The future folk-rock singer-songwriter doesn’t known how that might’ve affected his desire to make a difference in the world, but in the 1980s — after the release of his hit single “If I Had A Rocket Launcher” — the Canadian became known as an outspoken political activist and hasn’t wavered in his firm stance against war-mongering, environmental damage, and various injustice.

His latest album, his 31st, Small Source of Comfort, has a couple of issue-oriented songs, the comical “Call Me Rose” about Richard Nixon getting reincarnated as a single mother living in the projects; and the somber tribute “Each One Lost,” written after his trip to Afghanistan where he witnessed the ramp ceremony for two fallen Canadian soldiers.

Samaritanmag.com talked to Cockburn about landmines, finding a cause, and music’s power. 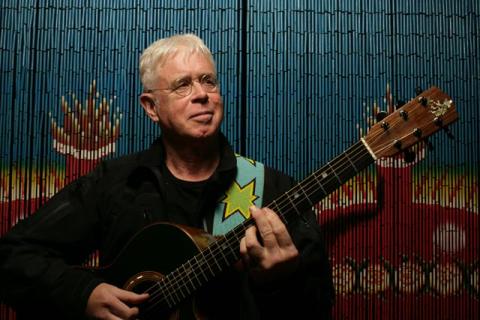 Have you seen changes come about in the causes you’ve supported over the years?

“How can I answer that backwards? Yes, I’ve seen changes. There have been changes. The landmine issue, for instance, was probably the most dramatic example of that where the campaign went from being very low-voiced murmuring to being this groundswell and then, ultimately, producing a treaty [The Ottawa Treaty or Anti-Personnel Land Mine Treaty in 1997], to which most of the countries in the world are signatory, banning the manufacturing and use of landmines. It’s not a complete victory because there are some major holdouts there, including the U.S. and Russia and China.”

How many landmines are estimated to still be buried out there?

“I don’t actually know current numbers, but there’s lots of them and they are still in use in places. They are, unfortunately, a relatively cheap and convenient weapon for certain kinds of warfare. The problem is, well, somebody invented them in the first place, but since the Second World War really, the wars that have gone on in the world have mostly been internal, not very often between countries; there have been a couple of international like Iran-Iraq and so on, but most of the wars that have taken place have been civil wars. So the old concept of putting mines along your border and then putting up a sign that says, ‘Don’t Step Here,’ — which was kind of how it was in the Second World War and elsewhere — it’s indiscriminate use of mines and increasingly over time, as a terror weapon. It’s a brutal presence in the landscape.

“In those limited civil war situations, there’s still continuing use of them and those wars are not signatory to the treaty; they’re just independent operators, warlords and whatnot. So they’ll use whatever they can get, landmines.  Of course, what have become noticed as an even cheaper and effective weapon in the hands of those kinds of operators is child soldiers. That’s another whole thing that’s a bit more on everybody’s radar at the moment, but then, to me, that’s an example of a campaign that did produce some noticeable results.”

We don’t hear about the landmines issue in the media as much as we did a decade or more ago. Is the issue as important a cause as it once was?

Has the treaty been presented to the Obama regime?

“I don’t know what’s been presented, but I doubt that’s anybody’s going to be very successful being heard with that kind of a campaign at this stage. When the American public is sufficiently tired of bleeding and they pull out their troops, then we might get a resurgence of interest in that. But in the meantime, there’s no end to these kind of issues coming up. For me, the big point is that it’s all one issue. It manifests in different ways, but whether you’re talking about industrial pollution or water rights or any of the humanitarian disasters that are exacerbated by poverty, all of these things are verification. You can go around the globe and pick out manifestations of what is essentially one issue, which is the way that we relate to the planet and each other and who are we in the system that we’re in.”

Were you politically and socially aware before you started writing songs and became a professional musician?

“Yes, to a degree, before; politically aware before that. From my teens, we were all brought up to read the news and pay attention to what’s going on although in a very liberal atmosphere, where you weren’t expected to do anything about anything other than vote.

“I had a public school teacher who we always had show and tell, a current events thing at the beginning of the day. This was grade three or four or something like that.  You’d bring in a news clipping and read it to the class and then talk about it. Somebody brought in a newspaper clipping abut rioting by student radicals in Turkey. This was in the ‘50s. So the teacher said, ‘What’s a radical?’ and none of us knew what a radical was. ‘A radical is someone who wants to make the world better by forcing change, where it needs to be changed.’ And then she said, ‘I hope you all grow up to be radicals.’  Imagine saying that in the ‘50s? Even in Canada, we weren’t under the same kind of fear of communism that’s the States was, but it wasn’t the time to be talking like that [laughs] and yet that’s what she said to us in class and it never went away. That teacher was one who I found particularly scary and did not empathize with her at all, but I remembered her saying that and I respected her. Anyway, I don’t know how much of an affect that had in the long run, but hearing an authority figure say that at an early age might have mattered.”

For young people who want to find a cause to support, can you recommend how they can find one that speaks to them, that they can fully understand and articulate?

“You can’t understand it without gathering as much information as you can about it. If you see something that bothers you in the world a little bit in your heart, do everything you can to find out about it. The means are there, especially the age we live in. You can go online and find out perhaps slightly suspect information about anything, and then you have to sift through what’s real and what isn’t. If you want to know what’s going on in the Middle East, don’t just take the world of FOX TV. Go to Al Jazeera online or whatever. Get all the points of view and then you can make sense of what’s happening. Not enough people do that. So if you have the energery while you’re young to start that, great.”

Do you agree with your friend Neil Young when he said that music doesn’t have the power to change the world anymore?

“I never thought it did. I must have been ahead of him (laughs). It always seemed to be that what music does is accompany what goes on. There is a place for music in political change for sure, but that place is created by a body of popular feeling that is going to respond to a song. If you don’t have that, then the song isn’t going to create that. If you’re an Egyptian in Alexandria, and you’re looking around at how much everything sucks and somebody comes along with a song that goes, ‘Everything sucks,’ you’re going to feel empowered by that and it might give you the energy you need to eventually making a change yourself.”