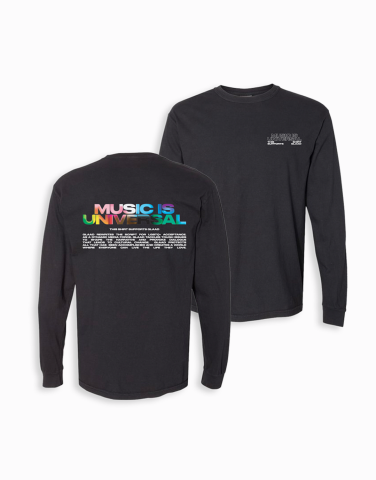 June is Pride Month, and Universal Music Group (UMG) is marking the occasion by selling items to benefit GLAAD and  The Dru Project, as well as promoting a mental health content series, artist listening parties and curated playlists.

Pride Month is celebrated in June in honour of the 1969 “Stonewall Uprising” in New York City. Homosexuality was still considered a criminal offence at that time and the Stonewall Inn was a popular gay bar. A police raid of the venue resulted in clashes and six days of protests that became known as the “Stonewall Uprising.”

The first Pride march was held in New York City on June 28, 1970, the one-year anniversary of the event.

UMG is seeking to create a societal sense of belonging for the lesbian, gay, bisexual, transgender and queer (LGBTQ+) community through its initiatives.

“Music is a unifying force in the world and has the power to uplift every voice, intersectionality and identity,” UMG executive vice-president and chief people and inclusion officer Eric Hutcherson said in a media release.

“We believe that all people should feel that they belong, and our hope is that our Pride celebration gives that sense of belonging to all members of the LGBTQ+ community and its allies, as well as supports the organizations and people doing the critical work of advocating for the community – not just during Pride Month but throughout the year.”

UMG and its Universal Music All Together Now Foundation have partnered with GLAAD, Queer Candle Co. and Social Goods to create a limited-edition “Music Is Universal” Pride collection. A Pride candle (USD $22), long-sleeve T-shirt ($50) and sticker ($5) are available through Social Goods, an online store launched in 2019 that sells statement-making merchandise that gives back to non-profits and raises awareness of issues.

Twenty-five percent of the proceeds from UMG’s “Music Is Universal” Pride collection sales will benefit GLAAD, which was founded in 1985 to advocate for the LGBTQ+ community.

Capitol Music Group, which was acquired by UMG in 2012, is selling limited-edition T-shirts to mark Pride Month here. Ninety per cent of the net proceeds will be donated to The Dru Project, a non-profit organization that helps gay-straight alliances and LGBTQ+ scholars.

UMG, in partnership with The Mental Health Coalition, will create content that educates and de-stigmatizes conversations around LGBTQ+ mental health. The Mental Health Coalition is comprised of organizations, brands and individuals working in joint support of ending the stigma surrounding mental health and changing the way people talk about, and care for, mental illness.

A series of Pride listening parties will be hosted by UMG LGBTQ+ artists and allies throughout June.

UMG and its artists will create playlists showcasing the LGBTQ+ artists and allies across the company’s global network of labels.

People will also be able to show their support for the LGBTQ+ community through the use of “Music Is Universal” Instagram filters.