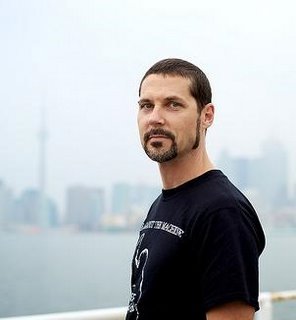 Friends of late Toronto DJ Martin Streek, a fixture on 102.1 The Edge for 25 years, 17 of those on-air, are throwing “A Party For Marty” on Sept. 6 at Toronto’s Opera House to celebrate the man whose loss is still felt in the music community 10 years after he took his own life at 45. Proceeds from the night go to the Canadian Cancer Society.

"The charity selected is the CIBC Run for the Cure.  It was Martin's favourite charity, and one that he participated in for many years,” Jeff Domet, Streek’s friend, Edge co-worker and co-organizer of the event, told Samaitanmag. “Marty was very active and 'crushed' this marathon every year that he participated in it. CIBC run for the cure is the Canadian Cancer Society. The money all goes to the same place.”

He said they could have selected a suicide prevention organization, but they chose CIBC Run For The Cure “because we knew for sure that would be something that Marty would fully support. We are keeping on his legacy supporting this charity that meant a lot to him.”

Hosted by former Edge personality Pete Fowler, A Party For Marty includes “some of Martin’s live-to-air DJs,” from his club gigs — DJ Dhingra, DJ Craig G, and DJ Shwarma — and remembrances from his former co-workers, such as Maie Pauts, Brother Bill and Ivar Hamilton. Pina Crispo,  former Edge promo director, is also involved in putting it together.

“This past July marked 10 years since we lost our good friend Martin Streek. Whether you knew him personally or from his radio days you know that he was one of a kind! Martin was one of the greatest and most beloved Toronto DJs and so to honour Martin and remember him, we are throwing a celebration!” it reads on the Facebook event page.

Doors at 9pm. Tickets are $7 in advance, $12 at the door.   The first 300 people through the door will receive a pin that says “Keep It Locked and Cranked,” one of Streek’s signature phrases.   A limited number of posters will also be available.

Streek who grew up in the Greater Toronto Area, was still in high school when he started volunteering at CFNY.  He was officially hired in 1984. In 1992, he was given his first on-air opportunity, hosting Friday nights from the studio and Saturday nights for Club 102 live at the Phoenix. He also hosted the Thursday 30 countdown, and two other live-to-air club broadcasts, Friday nights at NRG/The Kingdom in Burlington, Ontario, which was replaced by Friday Night Live at Toronto’s the Docks/Sound Academy; and Sunday nights at Toronto’s Velvet Underground.

A documentary is also in the works about Streek by Wil Dunlop who met the DJ in the late 90s. It is reportedly titled Keep It Locked & Cranked. The filmmaker is looking for any clips and pics. Email them to mstreekdoc@gmail.com.