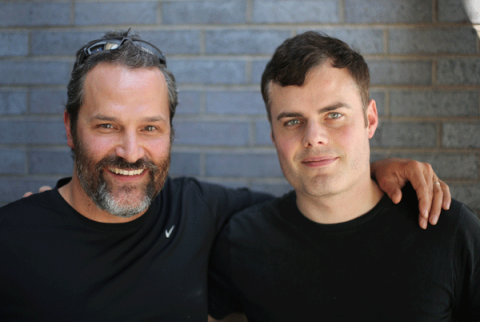 Marc Martel would love to go on Ellen again, reach out to the people who viewed his Queen Extravaganza audition video “Somebody To Love” 7.7 million times, and if American Idol hadn’t recently ended even go on there again to perform, as he did when Brian May and Roger Taylor ultimately picked him for their official Queen tribute show. But this time, the Canadian singer, and one-time frontman for Juno Award-winning Christian rock band Downhere, would be performing an original, “No More Hurting People.”  The charity single benefits One Fund Boston, which is providing support to those most affected by the two bombings that took place near the finish line of the Boston Marathon on April 15.

“I’d love to help in any way I can,” Martel tells Samaritanmag from his home in Nashville. “If the song helps [people], that’s what it’s for. The more people hearing it the better.”

Billed under the name Vapor feat. Marc Martel, the song was co-written with producer/musician Mark Heimermann and is available for free download with an option to pay-what-you-can to One Fund Boston. The video — featuring shots from the horrific tragedy that day and aftermath; as well as other noted world events from WWII to 9/11 — was directed by Michael Houlihan (watch below).

The title of the song “No More Hurting People” is taken from a sign Richard wrote on a sign last year after the murder of 17-year-old Trayvon Martin by George Zimmerman, who is currently on trial in Florida. It was part of the child’s school assignment at his Neighborhood House charter school in Dorchester, MA. It also contained the word “peace,” a peace sign and two hearts.

Trayvon Martin’s parents, Sybrina Fulton and Tracy Martin, released a statement to the media the day after the bombings.

“Our hearts are broken over the tragedy in Boston yesterday,” it read. “Our family sends our sincerest condolences to all of those who have been affected by this terrible situation.  We especially would like to send a message to the family of eight year old, Martin Richard.

“We have come to understand that the peace sign that Martin is holding in a photo being, circulated throughout the media, was created in response to a lesson by his teacher about the death of our son and the issue of violence. From our family to yours', we are praying for you, thinking about you and will remember your son for the rest of our lives.

Martel wasn’t aware of the circumstances that prompted the little boy to write the “no more hurting people” sign. In fact, at the time, two weeks after the bombings, he wasn’t even aware of the photograph that had been circulating around world of Richard holding it.  But he had been thinking of writing a song bigger than him.

“I’m in this new phase where I’m not with the band (Downhere) anymore and I’m writing solo stuff,” says Martel, who is still touring with Queen Extravaganza and has more dates in August and September in Canada and the U.S. He just released his solo debut EP, ">The Prelude.

“Up until now, it’s been a lot of shoe-gazing introspective stuff, a few love songs, and I was having an introverted moment of talking to myself and saying, ‘What do I want to write? What kind of artist do I want to be?’ I decided that I wanted to write at least one song for the album that was bigger than me, that would really inspire people.

“So I planned to write with my friend Mark the next day. We already had this other idea that we were going to work on and as soon as we got into the studio Mark was like, ‘Man, I just got inspired by this picture of Martin Richard. He showed me this picture. I had never seen it actually.’ He’d already started the chords and put in the verse and had the line for the chorus — no more hurting people. That day, we finished the song and the next Saturday we finished the recording of it. Basically, we did it in two days.”

“A sign for love / A cry for peace / From a city’s child to the grieving streets / With simple phrase …” the lyric opens.  The chorus includes Richard’s simple plea: “No more hurting people.”

“We wanted to keep it universal, but at the same time there is a nod in the lyrics to what actually inspired the song — the city’s child — and we talk about the sign that he’s holding and there’s a quote from President Obama the day after the bombing ‘Make no mistake we will run again,’” says Martel.  “It is definitely a song that was specifically inspired for Boston, but we wanted it to be universal for any kind of tragedy or a time when people are hurting.

“I didn’t really think of why he [Martin Richard] had written it, but more how it was an ironic prophetic thing, his writing it post-mortem, and making his message — which was very important — breath new meaning that he probably didn’t originally intend but did at the same time.”

Martel — who completed  The Prelude EP long before the Boston bombings — plans to put a new version of “No More Hurting People” on his full-length album, rerecorded and “more my style,” he says.

“We just wanted to get it out there cause it’s a song for the moment,” Martel explains. “So we intentionally didn’t really spend a lot of time trying to come up with a new sound for that song. If you hear strong influences in the way it’s recorded right now you’re probably right. It’s got a very strong Coldplay influence.

“We just wanted to record it in a way that was a sound that was recognizable and reminiscent to people, just so it would sound like an anthem. Because we really do feel that the song is an anthem for the moment, not just for this moment but for anytime people are hurting.”