R.E.M., Death Cab for Cutie and Others Join 30 Days, 30 Songs for A Trump-Free America 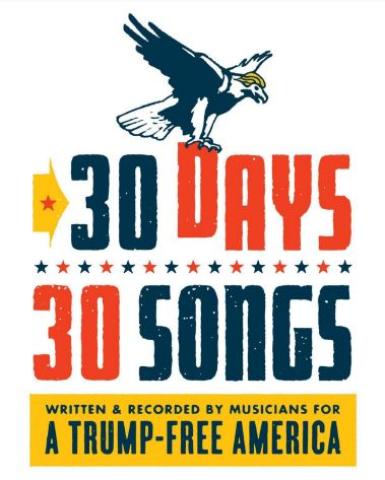 Artists such as R.E.M., Aimee Mann, Death Cab for Cutie and My Morning Jacket’s Jim James have donated their music to 30 Days, 30 Songs: written & recorded by Musicians for A Trump-Free America.  New songs will be posted daily at 9 a.m. (PT) at 30days30songs.com, as well as via Spotify and Apple Music playlists, until Election Day, Nov. 8.

The first track and lyric video is "Million Dollar Loan" by Death Cab for Cutie.

Proceeds from all music purchases will go to the Center for Popular Democracy (CDP), which works towards achieving Universal Voter Registration for all Americans.

30 Days, 30 Songs is a “daily, evolving playlist” that sees independent and alternative artists providing new and previously unheard tracks to the cause, including a previously unreleased live track from R.E.M.

The project was initiated by McSweeney's founder Dave Eggers (known for works such as A Heartbreaking Work of Staggering Genius and A Hologram for the King.  Already appalled by Trump's campaign, Eggers found himself even more so after covering a Trump rally for The Guardian.

"While the audience was waiting for Trump to appear, I was pretty surprised to hear music by Bruce Springsteen, Elton John and Queen," Eggers said in the press statement. "None of these musicians support Trump, of course, so it occurred to me that this election would benefit from the timely resurrection of the political protest song. From Woody Guthrie to Public Enemy, we know that songs can change minds, and particularly now, we need to motivate voters to stand against bigotry, sexism, hatred and ignorance."

The 30 Days website details the reasons for protest against Trump, citing his lies and half-truths, pandering, inflammatory statements, and his attacks on women, Mexican-Americans, Muslims and those with disabilities.

They ask all Americans to register to vote and to share the "songs of protest," stating, "You are a steward of this democracy and your actions shape it at every turn. When you speak out, you shape our democracy and when you remain silent, you shape it as well. Do not let your voice go unheard. Join us and demand an America of tolerance, respect, and equality. Demand an America that moves toward racial, economic, and environmental justice."

It's not unusual for artists to speak out during an election campaign, but Trump's bid for the presidency has created a sense of urgency amongst people who see him as a blight on American democracy. We have seen bigger campaigns this year, but they are less pro-Hillary Clinton than they are anti-Donald Trump (one highly visible example being Joss Whedon's "Save the Day" video, featuring, as they put it, "lots and lots of famous people”).

Lead-off track “Million Dollar Loan” "deals with a particularly tone deaf moment in Donald Trump's ascent to the Republican nomination," Death Cab for Cutie frontman Ben Gibbard explains in the press release. "While campaigning in New Hampshire last year, he attempted to cast himself as a self-made man by claiming he built his fortune with just a 'small loan of a million dollars' from his father. Not only has this statement been proven to be wildly untrue, he was so flippant about it. It truly disgusted me. Donald Trump has repeatedly demonstrated that he is unworthy of the honor and responsibility of being President of the United States of America, and in no way, shape or form represents what this country truly stands for. He is beneath us."

Watch the lyric video below, directed by Simian Design.