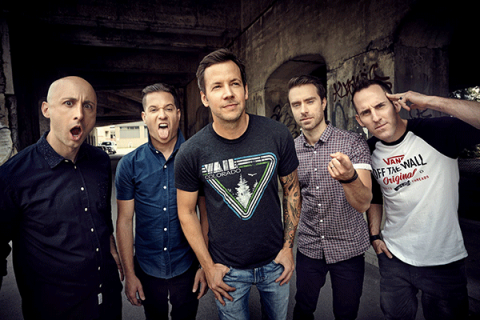 Canadian rock band Simple Plan is stepping up to help those displaced by the wildfires raging in and around Fort McMurray, Alberta, by donating $10,000 to the Canadian Red Cross' Alberta Fire Appeal and encouraging its fans to contribute as well.

Donations to the Canadian Red Cross Alberta Fire Appeal provide relief for those affected in the form of emergency food, clothing, shelter, personal services, and other necessities to help assist with recovery and resiliency.

"Following the news of the wildfires which caused mass devastation in Fort McMurray, Alberta, the members of Simple Plan along with the Simple Plan Foundation volunteers were shocked and saddened by the plight of evacuees. Having played a concert there just a few years ago, the band fondly remembers the warm reception they received from the fans and entire community," said a post on the band's website.

"The Simple Plan Foundation will donate $10,000 to the Canadian Red Cross in order to do its small part in helping those affected by this terrible tragedy and to help rebuild these proud communities.

"Simple Plan would like to encourage all of their fans as well as all those touched by these events to join the growing movement of support in this country and to donate generously. To make a donation, please visit www.redcross.ca.

"Our thoughts are with all those affected and we sincerely hope the community can quickly get back to some sense of normality. Courage."

In the area around Fort McMurray, there are 15 separate wildfires covering 284,214 hectares. The city of 61,000 is currently on a mandatory evacuation order with the Canadian military having been called in to help escort citizens out of the danger zone.

As of today (May 17), the mandatory evacuation order remains in effect for Fort McMurray and neighbouring communities Anzac, Gregoire Lake Estates and Fort McMurray First Nation. So far at least 1,600 homes in the city have been demolished in the flames. Early estimates suggest the fires have caused $9 billion of damage in the Fort McMurray area, which would rank as the most expensive natural disaster in Canadian history.

Currently there are 1,919 firefighters, 161 helicopters, 377 pieces of heavy equipment and 29 air tankers battling the fires.

Simple Plan aren't the only entertainers who've pitched in to help Fort McMurray's displaced. Rapper Classified is donating the proceeds of the single "Work Away" to the cause; GroundSwell Music donated a week's worth of sales to help; Joel Plaskett used merch sales from a show to provide aid and the Toronto Blue Jays held an auction to raise money for Fort Mac residents. Additionally, companies like TD Bank and Aeroplan are contributing  as well.