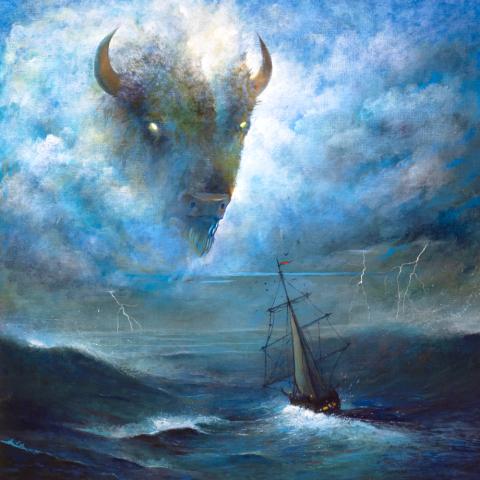 The band, whose name means territory belonging to the monarch, or, more accurately, stolen from First Peoples, previously released “Mountain” about colonization and “End of the Road” about missing and murdered Indigenous women and girls (a staggering 1181 between 1980 and 2012, according to the National Inquiry’s report, released in 2019).

“’White Buffalo is the third instalment in our trilogy of songs about Indigenous rights,” reads a collective statement in the press release from Cody Bowles (vocals and drums) and Kevin Comeau (guitar, bass, and keys). “’Mountain’ is what happened.  ‘End of the Road’ is what is happening. ‘White Buffalo’ is manifesting what will happen: overcoming oppression and rising up to reclaim one’s land.

“The White Buffalo is a symbol of manifestation,” they explain. “When Colonizers came to North America they tried to wipe out the Buffalo to starve Indigenous people to death. The buffalo are still here. We are too, and together we’ll overcome.”

Bowles is half Mi'kmaq, an Indigenous tribe from Nova Scotia, and Comeau is Jewish. The two met in Oshawa, Ontario, and formed the band in 2014.

In an interview in 2020, Comeau told Samaritan, “Cody had family that went through the residential school system; I had family that went through the Holocaust. It’s this weird thing of growing up in very WASP-y [White Anglo-Saxon Protestants] areas and being very conscious of the fact that you and your siblings are probably the only people who share your culture in a town of a hundred thousand people. It’s that isolated feeling and you start to put shame onto where you've come from and who your family is. and you try and hide that and blend into the whitewash society.

“I think both of us have come into a lot more of our own and getting back to our roots, our family's cultures, as we've grown as people. "Mountain" was when we finally came into our own as a band that’s going to talk about these issues because, even though we called ourselves Crown Lands from the get-go, we were reading about the definition of crown land. We really wanted to make a stand from the get-go and try and make a difference and make people recognize that crown land is indeed stolen land and it has to be reclaimed. The Land Back movement, which has come to prominence, is something we believe in.

“It took a long time,” he added. “It wasn't just an overnight decision to talk about these issues. "End Of The Road," the music was written before the lyrics were, and then all of a sudden Code and I started reading a lot about The Highway of Tears. We were listening to the Thunder Bay podcast…Each episode of the podcast deals with different issues related to Indigenous people in Thunder Bay, but the takeaway is that it is statistically the most dangerous place in the world for Indigenous youth. We were realizing that Canada's this international beacon of hope for so many people, but it's a fallacy, right, because Canada has a lot of work to do to reconcile with Indigenous people.”

The band has also released “The Oracle,” a 13-minute multi-part opus, which, according to the band, “continues another story that Crown Lands is creating, revealing the origins of the Queen character featured in the “Context: Fearless Pt. 1. We wanted to take the listener somewhere and evoke a sense of adventure,” says Bowles in the press released.

In the summer of 2020, Crown Lands released their self-titled debut album, an acoustic EP, Wayward Flyers Volume 1, and in 2021, to date, have put out “Context: Fearless Pt. 1,” “Right Way Back” and these two new ones, “White Buffalo” and “The Oracle.” The pair also just announced The Big Wave Tour — the title for which is taken from the opening line of “White Buffalo” — their first as headliners. Skye Wallace is opening. Tickets go on sale July 16 at 10 a.m. ET on the band’s website. See dates below: