Rwanda: Rises Up! Documentary And Album Coming This Month 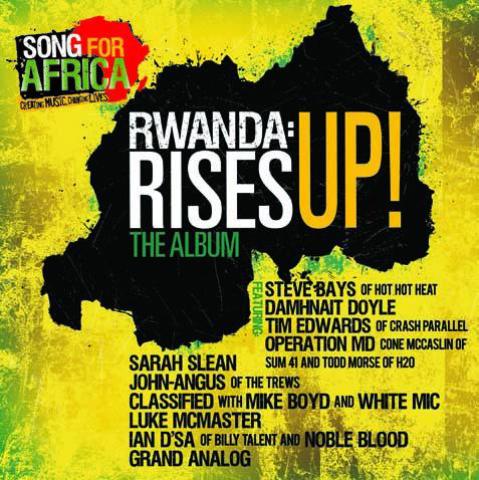 Rwanda: Rises Up! is a documentary that will premiere on Citytv stations across Canada at 8 p.m. on June 19 and a Sony Music downloadable album that will go on sale via iTunes three days later to raise awareness of recent developments in a country where an estimated 800,000 people lost their lives in 1994’s genocide.

The documentary, directed by Derek Horn, followed Canadian music artists Sarah Slean, Damhnait Doyle, Steve Bays (Hot Hot Heat) and Tim Edwards (Crash Parallel) as they interacted with Rwandans during a visit to the impoverished African nation last November on behalf of Song For Africa. You can read more about it in a Samaritanmag.com article found at http://samaritanmag.com/features/rwanda-rising-up-album-and-doc-features-hot-hot-heat-billy-talent-operation-md-and-more.

The album opens with “100 Bananas,” which was written by Bays and Slean and features the former on lead vocals. The melodic pop-rock song is better than anything on Hot Hot Heat’s new album,  Future Breeds.

Doyle and Slean don’t broaden their horizons by using acoustic guitars and strings on “Komera” and “Not For Sale” respectively. “Canada To Kigali” is an ensemble-performed hip-hop/dance number that’s sung in English and one of the Rwandan languages. The hip hop continues on Classified’s “Trying To Make It Work.”

Rwanda is known as the “land of a thousand hills,” and D’Sa wrote and recorded a song of the same name for the album. The political track is a rocker with folk elements and features impressive guitar, as you’d expect. But D’Sa’s voice easily carries the material, which you might not.

Another highlight is Operation MD’s anthemic “We Stand,” which features Itorero and samples recorded by producer David Bottrill (Tool, Godsmack) at the Kigali House studio in Rwanda’s capital city of Kigali.

Itorero’s vocals add a bit of an African influence to McMaster’s pop song, “Carry You.” Acoustic guitar and loops dominate the instrumental “Yearning.”

The album ends with another bilingual cut, the always stirring “Amazing Grace.” Things really pick up three-quarters of the way through when Sharon Riley And The Faith Chorale join in.

Here’s the track list for the Rwanda: Rises Up! album: