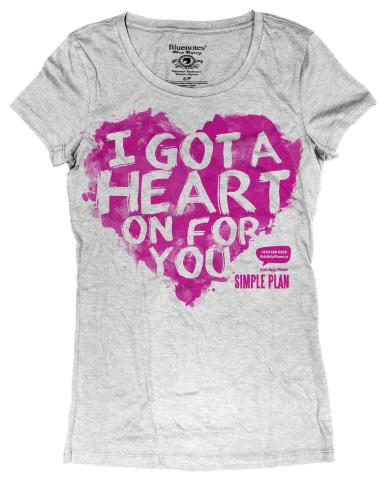 Earlier this year, Simple Plan sold a limited-edition T-Shirt benefitting The Red Cross’ Japanese earthquake and tsunami relief efforts, and as 2011 draws to a close, the pop-rock band has co-designed another T-shirt with clothing retailer Bluenotes with the proceeds going to Kids Help Phone.

Available for a limited time only, November 25 to December 18, at more than 100 Bluenotes locations across Canada, as well as online for U.S. and Canadian customers at www.bluenotes.ca, the two designs are based on the title of the Montreal band’s latest studio album, Get Your Heart On! 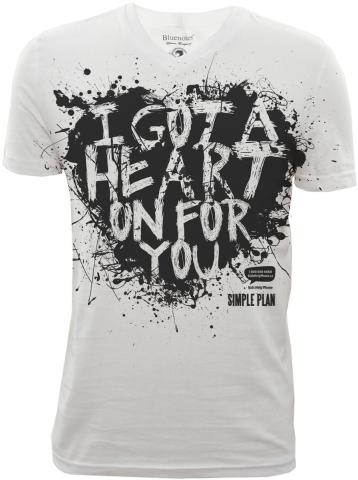 Simple Plan — singer Pierre Bouvier, drummer Chuck Comeau, bassist David Desrosiers, and guitarists Sebastien Lefebvre and Jeff Stinco — has sold more than 7 million albums, since releasing its debut, No Pads, No Helmets…Just Balls in 2002. The group started its own Simple Plan Foundation in 2005.  In 2008, the band donated $10,000 to Kids Help Phone and invited the organization to set up information booths at its concerts. The band also recorded a video testimonial that’s often presented at high school tours nationwide.

Since 1997, Bluenotes has been a major sponsor for Kids Help Phone, raising more than $1.3 million. Along with the sale of the T-shirt, Bluenotes will also be hosting a contest on www.bluenotes.ca, in which a winner from Toronto will get the chance to help Simple Plan present a cheque from the T-shirt sale proceeds to Kids Help Phone, along with various other prizes.

There will also be a ticket giveaway to each of the band’s 2012 Canadian tour dates, 13 in all, running from February 9 to 29.

“The spirit of generosity that comes from every facet of our community, including the creative and corporate world, is a major part of the heart and soul of Kids Help Phone,” Kids Help Phone president and CEO Sharon Wood said in a statement. “This partnership with Simple Plan and Bluenotes is one that brings together two of our long-time supporters. The collaboration between the two has resulted in a youthful, energetic, and inspiring campaign, the prefect combination for Kids Help Phone.”