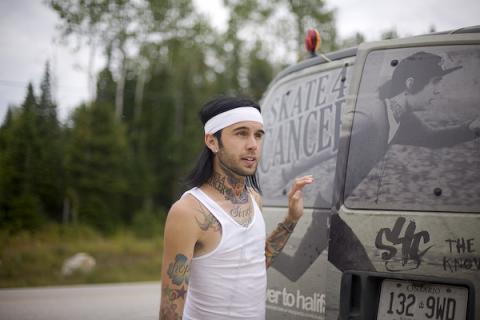 The founder of Skate4Cancer has evolved his vision. Rob Dyer, the 27-year-old Newmarket, Ontario native who has skateboarded across the U.S., Canada, New Zealand and parts of Australia to raise awareness about cancer, has a new goal in mind: the Dream Love Cure Centre (http://dreamlovecure.org/).

“It’s basically going to be a support centre for kids who are going through cancer, or kids who have been impacted directly or indirectly by the disease,” Dyer told Samaritanmag.  “There aren’t a lot of places available for kids to go and talk and share their emotions and stories, especially on the counseling side of things.

“When you lose someone to cancer, I find that there’s not really many places for you to turn, because it’s a life-changing experience. And if you don’t have a place that’s non-judgmental, it can be really hard on kids.”

Dyer knows from personal experience: within a year, he lost his mom, Wendy, his grandparents and his best friend Matt McInnes to the disease.

And he’s not alone: according to stats published on the Canadian Cancer Society website, an estimated 1 in 4 Canadians are expected to die from cancer, with an estimated 173,800 new cases being diagnosed every week.

Dyer’s loss occurred eight years ago, and he admits he fought depression, crediting his friends with bringing him out of his funk and keeping him positive.

Skate4Cancer was Dyer’s method of turning a negative into a positive.

“I wanted to do something where I didn’t feel so helpless, especially when you look at something like cancer,” Dyer admits.

Realizing that other kids were in similar situations — devastated by the impact of this horrible disease and possessing few, if any, mechanisms to cope with their losses — Dyer decided to form Skate4Cancer and take his message across North America.

“I always loved skateboarding when I was growing up,” Dyer explains. “Skateboarding was a natural way for me to draw attention to the cause, and try to drum up awareness for our organization. You’ve got to enjoy what you’re doing.”

Dyer says the initial inspiration to form his non-profit organization came from another icon: Terry Fox, the one-legged cancer activist whose 1980 cross-Canada Marathon of Hope took him from St. John’s Newfoundland to Thunder Bay, Ontario, before he became too ill to continue.

By the time Fox was forced to curtail his 143-day journey at the 5373 km mark, he had raised $1.7 million for the fight against cancer and become a national and global hero.

Annual Terry Fox Runs and other related events staged around the world have since raised more than $500 million towards cancer research.

“When I was a kid, my parents always took me to the Terry Fox Run and told me what he did,” says Dyer. “I believe it was basically the same idea – why don’t I skateboard, try to convey the same sort of message and draw awareness to the cause?”

So armed with lofty ambitions but little experience, Dyer headed to Los Angeles in 2005 and spent the next five months skateboarding from L.A. to Newmarket, Ontario, raising money and spreading the message of cancer prevention.

“I was just finishing high school when I started Skate4Cancer,” says Dyer. “Then we got more into trying to get the awareness out about cancer prevention more so than raise money.”

There were obstacles. One of his major sponsors pulled out shortly after Dyer’s trek began because they weren’t getting enough publicity, and California police shut him down for part of his journey because it was illegal to skate on interstate highways.

It simply never occurred to Dyer that he would have to contend with red tape.

“Being an 18-year-old boy, you don’t think too much about that stuff when you start out, right?” says Dyer. “You have a dream and you just kind of go for it. But when we started the skate, we realized there were rules. In certain states, for instance, it was illegal to skateboard. So we got a lot of resistance from police.“It was a big challenge, because we believed we were doing something good that was going to help people.

Dyer, who skated an average 40 to 80 km daily, compensated for the missed miles in Phoenix, Arizona, but suffered an ankle fracture in the process. Despite raising just under $100,000 for The Cancer Society and The Princess Margaret Hospital combined, Dyer still looks at that particular skate adventure as a blemish.

“It kind of felt like a disappointment,” admits Dyer. “We weren’t able to do it in a straight line.”

The second time — and his second target, his home country of Canada — proved to be a much more rewarding adventure.

“That was a lot different,” he concedes. “We were actually able to skate from point A to point B.”

Dyer was surprised at the generosity of those he met on the road who warmed to his cause and exchanged stories.

“We ‘d get a lot of people who would come over and offer us water and food and stuff like that to kind of keep us going and help us out. We’d also have people who would pull over at the side of the road and sit down and talk with you a bit about something that happened in their life — which was very similar to what we went through with cancer. That was the inspiration — people sharing and try to relate with each other. That always kept us going through the hard times.”

Last year, Dyer took his Skate4Cancer cause outside North American borders for the first time, traveling to New Zealand and Australia. He had completed the New Zealand leg and was midway through Australia when tragedy struck.

“About halfway through the Australian leg, a car bumped into me,” he recounted.

The resulting groin injury forced him to fly home for treatment, but Dyer remains undeterred.“But we’re heading back there in December (2011).”

Before Dyer returns to Australia, he’ll cross the Atlantic and skate across France within the next month or so, finalizing the date once he deals with “ankle problems.”

With the support of Element Skateboards and Circa running shoes, Dyer also plans a cross Canada tour of colleges and universities, offering them a day of bands, inspirational speeches and cancer prevention health information.

Due to his outreach into the music community under The Cure Is Knowledge banner, Dyer has become an underground sensation, speaking to hundreds of thousands of kids at events that include concerts and health information.

“The Cure Is Knowledge is a music thing we do,” Dyer explains. “We put on concerts to educate kids about cancer prevention.

“Three years ago, we started a Canadian concert series that was basically free around the country. The first artist to do all the dates and jump in the van with us was hip-hop’s Shad. Lights also gave us a song, so the Toronto music community has really been good to us and has really helped us get that message out there.”

As of press time, Dyer hadn’t confirmed the bands for the fall jaunt, but other musicians who have rallied to the Skate4Cancer/The Cure Is Knowledge cause include Alexisonfire, Billy Talent, Cancer Bats, City And Colour, Moneen and Silverstein.

Dyer will be reaching out to the music community support again as he transforms his Dream Love Cure Centre into reality.

He’s hoping to have it open within a year, but says an exact timeline is unpredictable, as he’s transforming Skate4Cancer and Dream Love Cure from non-profits into charities so he can begin accepting donations to help build the centre.

Once he finds a Toronto location, he’s confident Dream Love Cure will be a positive complement to the hospital support system when it comes to dealing with the emotional impact of cancer.

“Although they do offer something at hospitals, we feel that that environment is not necessarily a place that kids want to go back to after that kind of tragedy in their life,“ Dyer states.  “So the Centre is something we want to open in Toronto but outside of the hospital network, so kids can come and really feel comfortable and not a place where they’ve gone through something tragic.”