Shawn Mendes is 17 and one of the most successful newcomers in pop music. His debut album, Handwritten, has charted all over the world, including No. 1 in Canada and the U.S. and he just finished a tour opening for Taylor Swift. But when the Toronto native is asked about his accomplishments, the first thing that comes to his mind is a campaign he did last year to boost the self-esteem of young people.

Mendes was just awarded the Allan Slaight Honour at Canada’s Walk of Fame show, recognizing “young, inspirational Canadian music artists who have achieved international success.” It comes with a $10,000 prize that he says he will probably use to “do something positive.”  Since launching his music career in 2013 by posting cover songs on the six-second video app Vine which led to a record deal with Island Records, he has been involved with DoSomething.org, Free The Children and Pencils of Promise.

The first was DoSomething.org, a non-profit which motivates young people around the world to get involved in social change.  His campaign was inspired by the lyrics to his first single, “Life of the Party” and addressed low self-esteem, depression and awareness of self-harm.

“The campaign was called Notes From Shawn,” says Mendes.  “All I was asking my fans to do was get a sticky note  and write ‘You rock’ or ‘You’re amazing,’ just something to make someone’s day, put it on the locker at school, so that whosever locker that landed on, even if it was a random person, read that and figured it was for them, even if they didn’t know who it was from; it’s just makes someone’s day. 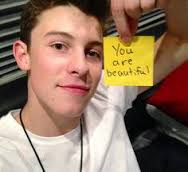 “And I did it too; I put sticky notes all over while I was touring across America.

“It was a really easy way to get my fans involved with something and it was really truly incredible the fact that we had 60,000 people sign up,” he says. “If you go online and type in ‘handwritten notes from Shawn,’ you’ll see millions of pictures.”

Although the official campaign ran from Aug. 27 to Oct.10 of 2014, Mendes says it continues to this day. “You can go on now and hashtag notes from Shawn [#notesfromshawn] and you’ll see a note from 10 minutes ago, I’m sure.”

He received tons of emails and messages telling him how much the anonymous sticky notes made their day.  “It really was a fun thing to do.  I definitely want to try and create something else like that around that.”

Mendes most recently worked with Pencils of Promise — founded by Adam Braun, brother of Justin Bieber’s manager, Scooter — a non-profit that builds schools (320 to date) and increases access to quality education for children in the developing world.

“We did a fundraiser [online] to help raise money to build a school in Ghana,” says Mendes. “It was really amazing because they sent us the pictures they helped raise the money for and we passed the mark super fast.”

Mendes has been helping from afar and hasn’t had a chance to visit young people in a developing country with a charitable organization yet. “I haven’t, but that is on my to-do list,” he says. “I want to travel to Africa if I can get a chance to.”