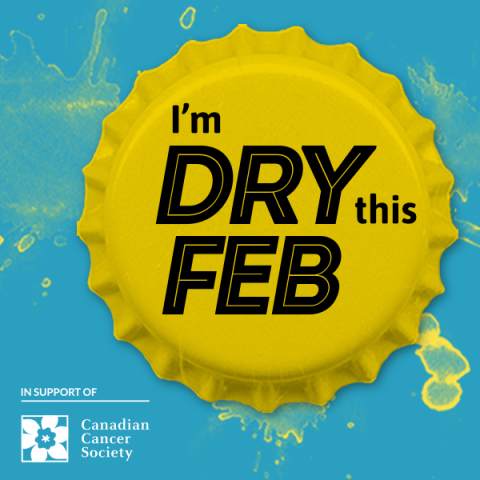 Dry Feb has raised more than $2 million for the Canadian Cancer Society over the past five years, and it’s putting on its biggest-ever marketing push to try and raise $3 million in 2021. The campaign challenges social drinkers to abstain from alcohol through February and to raise money for the cancer organization by collecting donations from sponsors.

The Canadian Cancer Society was formed in 1938 and has invested more than $1 billion in cancer research. It also educates people on how to reduce the risks of cancer, provides support services to people with cancer and their loved ones, and advocates to governments on cancer-related issues on behalf of those affected by the disease.

“We wanted to educate the public about the risks of consuming any type of alcohol and its links to different types of cancer,” Canadian Cancer Society senior manager of campaigns, online programs and partnerships Tracey Tang told Samaritanmag. “Drinking any type of alcohol increases your risk of head, neck, breast, stomach, pancreatic, colorectal and liver cancers.”

Proceeds from Dry Feb will fund research and provide a national support system for people affected by cancer, such as online and phone-based peer support programs. That includes CancerConnection.ca, which gives those with cancer, and their caregivers, a place where they can share their experiences and build supportive relationships.

The Canadian Cancer Society’s 2019 ComPARe (Canadian Population Attributable Risk of Cancer) study claims that if more Canadians limited their alcohol intake it could prevent about 44,300 cancer cases by 2042.

“We’re not saying that you shouldn’t drink completely,” says Tang. “The Canadian Cancer Society’s recommendation, if you choose to drink alcohol, is to keep it to less than drink a day for women and less than two drinks a day for men.

"One drink is 12 ounces of beer, five ounces of wine or a one-and-a-half ounce shot of spirits. This is our way to encourage Canadians to drink moderately and to learn more about drinking and the risks for getting cancer.”

A new Canadian Cancer Society survey of 1,000 Canadian adults shows that three in 10 of them intend to drink less alcohol in 2021. Forty-three per cent of Canadians drink alcoholic beverages a few times per week, with 49 percent drinking beer weekly and 25 per cent drinking three or more glasses of wine per week, according to the survey.

The Canadian Cancer Society recommends that heavy drinkers or people dependent on alcohol speak with their doctor before signing up for Dry Feb.

Going dry for a month may prompt people to examine their drinking habits and reduce or eliminate their alcohol consumption beyond February. It may also encourage them to adopt other healthy habits, such as exercising more regularly and eating more nutritious foods.

Two in five Canadians spend at least $50 a month on alcohol, while close to one in five spent more than $100 per month, according to the new Canadian Cancer Society survey.

The Dry Feb website includes a calculator that shows how much money and calories someone can save by abstaining from alcohol for a month.

A new option introduced this year is Dry(ish) Feb, where people can choose to participate for 21 days, 14 days or a customized timeframe that works for them instead of for the whole month.

“That’s a way for us to expand our flexibility for our fundraiser base,” says Tang. “People can choose an appropriate time period to go dry for, while also making a difference at the same time.”

Dry(ish) Feb can also act as a gateway, according to Tang, whereby people “can try it for a week or two to try it out and then next year maybe they’ll come back and do the whole thing.”

Sponsors donate to participants online via a Dry Feb profile page, which can be found by typing a name into the search engine on the Dry Feb website. It uses the honour system, trusting that participants will keep their alcohol abstinence pledge.

There’s also a “Golden Ticket” that gives participants a day off from Dry Feb that can be purchased for a minimum donation of $25. Sponsors can search the participant’s name on the website, tap the “Donate” button and then tap the Golden Ticket tab and select a date in order to purchase one.

“If there’s a virtual social event they want to attend or there’s a milestone like a birthday or someone else’s birthday, they can ask their support base to donate a Golden Ticket so they can have a night off from the challenge and drink without guilt for that day, but also make a difference at the same time,” says Tang.

Dry Feb started in Ontario in 2016, expanded across Canada in 2017, and has grown every year. It raised $899,000 last year, when it introduced radio advertising for the first time.

“We’ve evaluated our business model very carefully, so this year for the first time we invested in TV advertising, which is helping to grow results significantly from the early signs we’re seeing,” says Tang.

This year’s Dry Feb campaign kicked off on Dec. 14, even though the challenge doesn’t start until February, to give people a head start on fundraising.

“The earlier you do it, the more impact you can make,” says Tang, a cancer survivor who took part in Dry Feb for the first time last year and raised more than $3,000.

The Dry Feb website offers participants a number of tools and templates to help them raise funds. It also provides them with a chance to win prizes for reaching certain donation levels.

While all proceeds from Dry Feb benefit the Canadian Cancer Society, it’s an initiative of Ezy Raise, an Australian peer-to-peer fundraising platform provider dedicated to helping charities around the world. Its campaigns — including Dry July in Australia and New Zealand and Go Sober for October in the United Kingdom — have raised more than $100 million.

Tang says the Canadian Cancer Society pays a small fee to Ezy Raise to run the program and provide technical support for the website.

“They helped us build the platform and allowed us to use the name Dry Feb and to fundraise in Canada. We’ve been working with them since the beginning of the campaign and they’ve been wonderful to work with.”

While Dry Feb only targets people of legal drinking age, Tang says the Canadian Cancer Society offers other ways for young people to support the charity. These include the Relay for Youth program and several activities that take place in schools.

The Canadian Cancer Society runs several other fundraising campaigns that may appeal to some people more than Dry Feb, including Relay for Life, Run for the Cure and the Daffodil Campaign.

For those interested in organizing their own fundraiser, the Canadian Cancer Society’s cancerfighter.ca website provides ideas and access to an online toolkit that has a step-by-step guide and resources to help people do it. People can choose where donations can be put into action, such as breast cancer research, for instance.

Here are Dry Feb’s tips for people to cut down the amount of alcohol they drink: