A 1973 Mercedes-Benz 350 SL Roadster once owned by late Communist dictator Nicolae Ceaușescu will be auctioned by Bonhams at the Mercedes-Benz Museum in Germany, March 19. All the proceeds will go to CrossCause, an Irish-based charity that helps more than 60 special-needs orphans in the small village of Nicoresti, in Romania, and has expanded its work into parts of Eastern Europe and West Africa.

“The sale presents a wonderful opportunity to raise money for an incredibly deserving charity through the sale of a motor car so closely connected to Romania’s turbulent history,” said Philip Kantor, Bonhams European motoring director, in a statement.

Ceaușescu — Romania’s last Communist leader, a position he held from 1967 until his repressive and brutal regime was overthrown in 1989 during the Romanian Revolution — was executed by firing squad on Christmas Day 1989 along with his wife after an hour-long trial.

He had owned Mercedes-Benz since 1973. The Romanian government auctioned off his estate in 1999, including 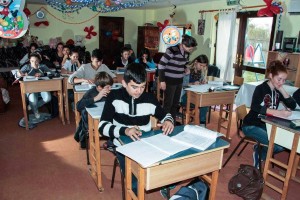 the car, which comes with “remnants of the security system installed by the Romanian secret police, including a Becker Mexico radio, and a Becker short-wave radio system hidden in the glove compartment,” according to Bonhams.

According to the CrossCause website, “Immediately after the revolution of 1989 and the execution of Nicolae Ceauşescu, all the failings of the communist regime were highlighted. One of these major failings concerned the children.

“Ceauşescu, in the seventies, unexpectedly and without any social preparation abolished abortion. Many families… were left to cope with the birth of unwanted children. In many cases they relied on homemade abortion methods. The consequences of these were disastrous: the birth of disabled children and a myriad of infants abandoned.

“The Nicoresti Spital housed 150 abandoned children with various disabilities, grouped in huge rooms, often tied to beds with chains, completely abandoned in nauseating dirt, without any medical care and often subjected to various types of violence.

“Despite improvements to the social care system and a huge amount of EU funding, there are still 100,000’s of children living in institutions or in the foster care system.”

The Mercedes will be auctioned as part of the Bonhams Mercedes sale at the Mercedes-Benz Museum in Stuttgart, Germany. The car has not been used since 2007 and has 17,500 km recorded.

END_OF_DOCUMENT_TOKEN_TO_BE_REPLACED

Patti Smith and her late husband Fred “Sonic” Smith’s 80s single from her album Dream of Life (and found on Land 1975 - 2002) has been used as an anthem and motivator in so many social justice issues and little guy proclamations. “And the people have the power to redeem the work of fools,” she sings. Smith has said they wrote the song to inspire others, reflecting back on their youth in the 60s, a time of signifant protest.    “We were trying to write a song that would reintroduce that kind of energy,” she told NME, adding that Fred “wanted it to be a song that people sang all over the world to inspire them for different causes. And he didn't live to see that happen, but I have.” Buy it here — Karen Bliss