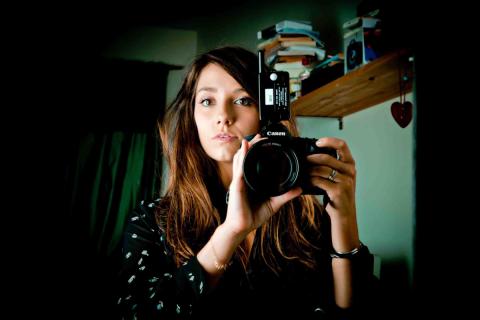 Rising young rock photographer Anna Webber has been named the first-ever ambassador in the history of The Multiple Sclerosis Association of America (MSAA).

The 25-year-old, whose work has appeared in such publications as Rolling Stone, Spin, People, Billboard and Variety, will begin making a series of public appearances and endorsements in March, which is Multiple Sclerosis Awareness Month in America (May in Canada).

Webber’s first assignment is as the face of MSAA’s new mobile phone app, My MS Manager, which she will help introduce at South By Southwest Music Festival (March 13 to 19) in Austin, Texas, where Ringful Health, the app’s manufacturer is based.

“Anna’s attitude about living with multiple sclerosis fits perfectly with MSAA’s message that people should strive to do all of which they are capable while remaining aware of their health and the steps they must take to maintain it,”  MSAA president and CEO Doug Franklin said in a statement. “As an MSAA ambassador, Anna can carry the word of our mission to enrich the quality of life for everyone affected by multiple sclerosis, while telling her own remarkable story.”

Webber began studying photography at the age of 18 in Italy with legendary British rock photographer Jill Furmanovsky and, a year later, was hired by another legend, Baron Wolman, Rolling Stone’s first chief photographer, as his assistant. He remains a close mentor.

She was diagnosed with MS in 2009. The inflammatory disease, for which there is no known cure, affects the ability of nerve cells in the brain and spinal cord to communicate with each other effectively.

To slow down the progression of the disease, she must self-administers medically prescribed shots and has learned to manage the headaches, nausea, numbness and other side effects of her symptoms and treatment.

“Multiple Sclerosis is not inhibiting me,” Webber said in a statement. “In fact, it’s almost having the opposite effect. It’s become a huge priority not to just take my meds, exercise, eat right and take vitamins, but to be social, be artistic, well-read, maintain relationships, have fun, and really take care and pay attention all around. That awareness makes the result all the more fulfilling. I encourage other patients to do the same: stay on their medication, do what they love, do their best to maintain a positive attitude, and everything else in-between.

“This new role with the MSAA gives me a whole new perspective,” she added. “It brings me a deeper level of fulfillment through photography. I‘m thankful for this opportunity, and I’m looking forward to discovering how much we can accomplish together.”