As I Lay Dying’s Tim Lambesis definitely practices what he preaches.  The lead singer for the California metal band is co-owner of clothing line Modern Rebellion Apparel and gives half of his profits to a charity for orphans.

“Most of the income so far has gone to a project called Trees Of Glory through the non-profit Children’s HopeChest, but it’s a project per project basis,” he tells Samaritanmag, “Maybe next year’s line of clothes goes towards a different project, but always an orphan charity related project.”

Trees of Glory is a non-profit dedicated to providing clean water for children in Duber, Ethiopia.

Lambesis and his wife are parents to three adopted children from Ethiopia, two daughters and a son.

“When it came time to do more of a public charity, it was like, ‘Well, I want something that reflects what I’m already involved in in my personal life. It was just a natural step for me,” he explains.

“I grew up and still live about 30 minutes from Mexico and I’ve been visiting orphanages since I was maybe 15 or 16 years old. Clearly, when I was a teenager it shaped the way I see everything and it stuck with me since then.”

Lambesis has been fronting As I Lay Dying since 2000, landing three albums in Billboard’s 200 chart with a new one, Awakened, out on Sept. 25. He started Modern Rebellion, he explains on the company web site, “to live for something more.”

“For many of us growing up, rebellion was a way to fight against what we felt were pointless and oppressive rules,” he writes.

“Today we often submit to popular thinking without notice and believe that our greatest purpose is to serve ourselves. The truest form of rebellion left is to reject this mindset and live for something more. That is why I have partnered in starting Modern Rebellion.

“What I profit from this endeavor goes to support orphanages that I have personally visited and benefits a group of people much more deserving than myself.

“Beyond that, I think the apparel and designs themselves create a style that well represents my personal taste.” 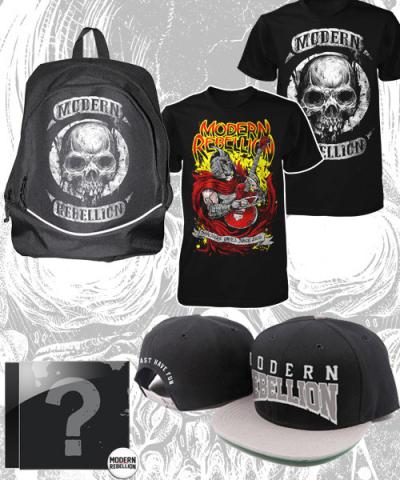 “It’s the easiest place to get it because it’s just in a handful of mom and pop shops at this point,” says Lambesis.

Trees of Glory is located 67 kilometers from Addis Ababa in Duber, on about 27 acres of land and has 13 buildings. The majority of people living in this area live below the poverty line. Many of the children are true orphans, both parents are no longer living, it says on the charity’s web site.

“Clean water is the most important need currently at Trees of Glory.  Almost 6,000 children die everyday due to unclean water,” according to Trees of Glory. Water from this well will is to drink, to cook with, shower in, wash clothes, and to irrigate the crops to help financially sustain the community.

Lambesis says this initiative is what prompted his decision to choose Trees of Glory as the first recipient of funds from Modern Rebellion.

“They shared that idea with me and I liked it. If they run out of money at some point, and they can’t give them more money, they’ve found a way to sustain themselves, which I thought was a good idea. At the same time, it’s going to take years to get to that point.”