The United Way is embarking on an ambitious – and colourful – new campaign, to help bring needed attention to the ongoing impacts that poverty and inequality continue to have on millions of Canadians. It will be launched during Toronto’s all-night art walk Nuit Blanche on Sept. 29.

Working with trend forecaster and consultancy business Pantone Color Institute,  the United Way announces the Unignorable campaign (#Unignorable) along with the development of a new colour created for the organization by Pantone.

The new colour is meant to represent the social ills and the continuous work the United Way and its various member agencies and community partners do to mitigate these issues, according to the press release.  It will be a significant component of all United Way marketing, advertising and public information assets that will accompany the Unignorable campaign.

“To highlight these issues, we wanted to create a distinctive color that was virtually unignorable; a color whose ‘can’t miss’ high visibility immediately stops you in your tracks,” said Laurie Pressman, vice-president of the Pantone Color Institute in a press statement. “Displaying a radiant glow that instantly mesmerizes, this irresistibly captivating coral shade we call ‘Unignorable’ stands out from its surroundings, draws immediate attention and with its high physicality, induces us to act.”

Unignorable is a national multimedia campaign of awareness of the millions of Canadians negatively affected by various issues related to health issues, poverty, housing and isolation. This will be highlighted by creative materials designed by internationally-renown illustrator Malika Favre, whose work has appeared on the cover of The New Yorker as well as for campaigns for Vogue, BAFTA and Sephora.

The new colour will be released to the public at a special event during Toronto’s Nuit Blanche on Sept. 29 as part of a major art installation that will be open from 7 p.m. to 7 a.m. and “will emulate the feelings of isolation, helplessness and uncertainly that millions of Canadians experience.” 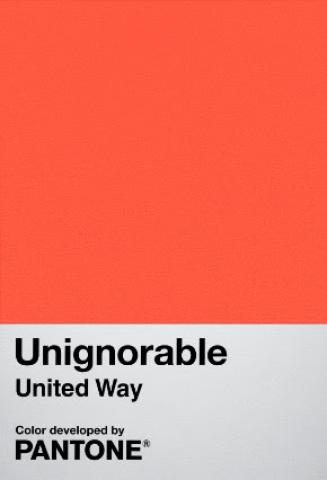 The work is intended to bring “attention to these issues and act as a venue for people to learn more about how they can get involved. Visitors are encouraged to share their experience on social media using #unignorable,” explained the press statement, which also stated that Unignorable was the United Way’s largest integrated public awareness campaign in it’s history to date.

“Issues like poverty, youth unemployment and social isolation negatively impact our communities by holding too many people back,” explained United Way Greater Toronto President and CEO, Daniele Zanotti, in the same release.  “To tackle these complex issues, we need everyone in communities across Canada to show their support. But first, we need their attention.”

A campaign launch film will also be unveiled on Sept. 29 and was directed by Montreal filmmaker Benjamin Nicolas.

Canadians are invited to go the new campaign website to learn more about the issues facing many of their neighbours within their community, as well as learn more about Unignorable, and how the new colour was created and what it represents.

The United Way Centraide organization has been operating in Canada since 1919, helping to create better quality of life for all Canadians in more than 5,000 communities across the nation.

According to the United Way Centraide Canada website, the organization’s mandate is formed around three primary objectives.

“United Way’s work focuses on three key strategies that create opportunities for everyone in our communities to live a better life. Moving people from poverty to possibility: United Way is helping to meet the basic needs of our community’s most vulnerable people, giving every Canadian the opportunity to realize a better future. Helping kids be all they can be: United Way is giving children and youth the support they need to get a great start in life, do well in school, and reach their full potential. Building strong and healthy communities: United Way is creating vibrant neighbourhoods, where everyone experiences a sense of belonging and connection to one another,” it says.

Each United Way or Centraide branch is a registered non-profit organization which is led by a volunteer board of directors.

(Please support Samaritanmag's original journalism by making a PayPal contribution using the email info@samaritanmag.com so we can increase the amount of content and writers we hire. Samaritanmag is the anti-tabloid, covering good people trying to change bad things. Let's make this thing bigger than TMZ.)