The cheap plastic yellow LiveStrong bracelets by the Lance Armstrong Foundation have raised millions for the cause, but really, who is going to wear that on a daily basis, if at all? Of course the dollar cost is no biggie and a worthwhile, inexpensive purchase, but isn’t it better to have a piece of jewelry that you can proudly wear? Vancouver jewelry designer and cancer survivor Susan Fiedler of Soul Flower has been turning heads with her elegant sterling silver bracelet engraved with the words we all feel — “Fuck Cancer.”

“I did not make the bracelet as a marketable item. I made it for myself and then other people wanted it,” Fiedler tells Samaritanmag. “I realized that it could be this great conversation starter. A lot of people felt the same way I did. The strong sentiment does scare people, but a lot of people feel really strongly about it in a way that they might not about a pink ribbon. It’s bold and it’s personal.”

In a little over a year, the sale of 710 bracelets, to date, has raised $35,500 for Vancouver’s InspireHealth, an integrated cancer care clinic where Fiedler was treated.

Cancer doesn’t run in Fiedler’s family, and she says there was no reason she should’ve got the potentially deadly disease. She took care of herself, ate healthily and stayed active, but cancer doesn’t discriminate. When, in October of 2007, at the age of 40, she was diagnosed with non-Hodgkin lymphoma, a blood cancer, it was like being hit by a ton of bricks.

“The type I [had] is not necessarily based on factors like smoking or getting too much sun, the things that lead to other types of cancers. The only thing that it’s tied to is possibly toxins in the environment and I wasn’t a farmer, exposed to pesticides and toxins. Just bad luck, basically,” she explains.

“I was told that my initial diagnosis was most likely going to be stage 4 and that was most likely going to be incurable, chronic and probably fatal. I was totally shocked. When the test results came back three weeks later, it had come back as not as life threatening as the doctor had originally thought. I thought that once I recovered I wanted to show my gratitude for that and felt I had been given a real second chance.”

Fiedler, who was born in Toronto and grew up in Vancouver, spent her summers as a teen working for her friend’s family jewelry business. She eventually took over the owner’s job, which involved buying goods overseas. At the age of 21, Fiedler founded her own sterling silver jewelry company Soul Flower, which has grown from two silversmiths to employing more than a hundred people to meet production and sales demands. 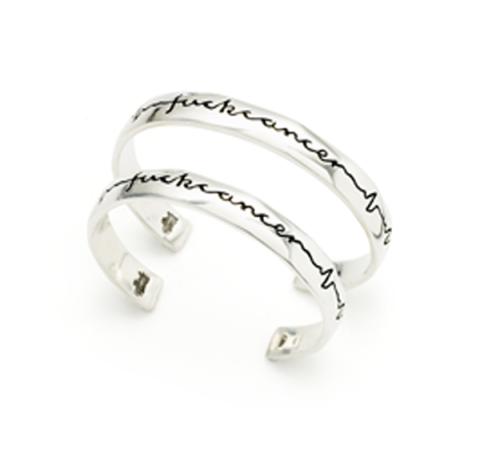 After she beat cancer, Fiedler was visiting the home of her friend Ameen Merchant, and noticed a beautiful metal cuff covered in Arabic script, whose words were meant to protect the wearer. She was immediately inspired to create her own charmed bracelet and “Fuck Cancer” sprang to mind. She launched the silver cuff bracelet, engraved with “Fuck Cancer,” in October of 2008, and sells it worldwide through www.fcancerembracelife.com at a cost of $150 for  large and $125 for small. Fifty dollars from each purchase goes to InspireHealth.

“It’s like a community centre for cancer patients, integrated cancer care free of charge to compliment the conventional care you’re getting,” Fiedler explains. “For example, if you’re getting chemotherapy, you can get complimentary acupuncture, complimentary nutritional counseling and complimentary yoga therapy. There’s a whole bunch of different therapy you can access, and doctors that are actually doctors, who have a holistic inspired practice.”

Among the Fuck Cancer bracelet customers are singer Sarah McLachlan, entrepreneur/Dragon’s Den panelist Brett Wilson and the band Barenaked Ladies. “They’re friends of mine and clients of Soul Flower,” says Fiedler. “They have all been personally touched by cancer. They got it immediately because there’s a real rock ‘n’ roll element to the bracelet. So they were happy to lend their support. Ed Robertson from Barenaked Ladies lost his mother to cancer this [past] year.”

Fuck Cancer bracelets are available online, in Vancouver store Y Yoga, and from InspireHealth. Fiedler plans to expand the line to stores in Ontario and is in talks of creating new items that are more affordable.

Fiedler says she’s really proud of the way the bracelets have touched and reached so many people with orders from the UK, Australia and U.S.

“People are starting to recognize that cancer patients need more than just conventional treatment. Where there’s a gap is between having your treatment and getting on with your life. There is a lot of unmet emotional and social needs of people who are cancer survivors or who are going through treatment,” she says. “Basically, that’s what I’m trying to address, create more community for people who’ve been through this experience.”