Much has been made about embattled Toronto Mayor Rob Ford spending time signing bobbleheads of himself, but the proceeds do go to charity.  One week after he admitted to smoking crack cocaine, thrusting the city once again into the international spotlight, hundreds of people came to Toronto’s City Hall on Tuesday to pick up a limited-edition $20 bobblehead. All proceeds are going to the City of Toronto’s United Way fundraising campaign.

The City’s staff are encouraged to give to United Way’s community fund, so that the charity can decide how to best use the funds where it sees fit, Mohamed Shuriye, United Way project leader for the City of Toronto, tells Samaritanmag. 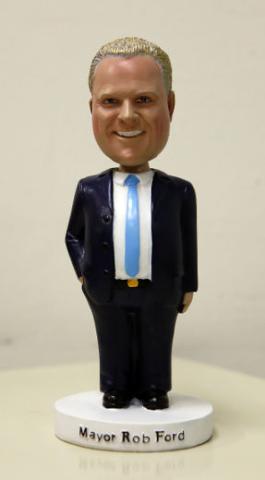 “United Way has three main sectors for where the money goes,” Shuriye says. “One is moving people from poverty to possibility, helping those who have been homeless and those struggling to find employment, or recent immigrants and youth who have had criminal issues integrate [into the job market]. Another area is creating opportunities for youth. That is a key priority for the City of Toronto. The last one is healthy communities, providing options for good and healthy food and working to support our senior citizens.”

Shuriye refused to comment on the appropriateness of accepting money from a fundraiser associated with a man who has admitted to doing hard drugs and is embroiled in a scandal.

The idea for the “Robbie Bobbie” arose from the Mayor’s office, Provost says. “Everyone does their part for United Way here.  We were looking for an opportunity for the Mayor to make a contribution. The idea for the bobblehead came out of City staff talking and brainstorming. Ford would be the first mayor of the city of Toronto to have a bobblehead.”

Only 1000 of the collectibles, dubbed the “Robbie Bobbie,” were available for pickup only. With this limited availability, the toys had sold out by the mid-afternoon. A lineup for the bobbleheads started before 6 a.m. Tuesday, although the City did not start handing them out until after 10 a.m. At noon, when Ford entered the City Hall lobby to sign bobbleheads, there were still hundreds of people in a line wrapped around the lobby’s rotunda.

“While I may not necessarily support and like the Mayor’s politics, the money is going toward a good cause so that is good enough for me,” Aaron Freeland, who lined up to get a bobblehead during his lunch hour, tells Samaritanmag. “Plus, the fun you can have with this sort of thing on Instagram and Twitter is worthwhile for me.” Freeland says he plans to post funny pictures of his purchased bobblehead on Twitter, with the hashtag #inadrunkenstupor.

Within hours of the fundraiser, two “Robbie Bobbie”s were selling for $500 each on Kijiji. The seller wrote that they the proceeds “will be going to a charity (to be determined) that deals with drug and alcohol addiction.”

Although Provost says that the City will not make any more of this bobblehead, “because of the overwhelming demand, we might do something else – another bobblehead with a different style.”