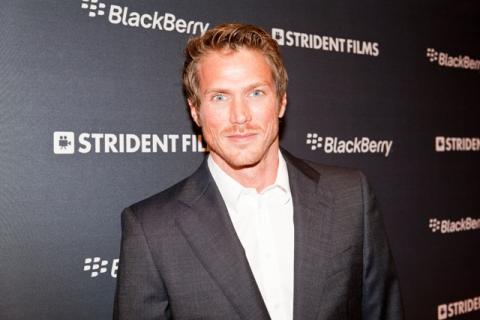 Actor Jason Lewis, best known as Samantha Jones’ handsome young beau Jerry “Smith” Jarod in Sex and the City, took much of 2010 and 2009 off and did something most of us wouldn’t have the patience or fortitude, let alone the skills, to do. He invited a recent amputee to stay with him at his California home and eventually taught him how to kite-surf in Hawaii.

That wasn’t exactly his design, initially — the kite surfing bit, but Lewis, an avid surfer, eventually found this could aid the man’s psyche after experiencing such a major trauma.

“I had a younger group of friends and one of the peripheral friends lost his leg and I saw that he didn’t really have the resources of home so I moved him into my house, and last year was all [about] that,” Lewis, 39, tells Samaritanmag, when he was in Toronto recently to promote, Textuality, a Canadian film in which he stars.

“I took him over to Maui. I have some friends over there and we taught the guy to go kite-surfing, figuring that if we could show him he could do something he never thought to do before he lost his leg, he’d realize his unlimited potential.”

Lewis’ succinct, matter-of-fact re-telling makes it sound so easy, but the whole experience definitely took its toll on the actor, who likely had never taken on a role so intense.

“I didn’t know how far I was going to get involved with the kid. By kid, he just turned 32,” Lewis says. “I’ve got to say my patience and resources were exhausted long before I asked him, ‘Time to go out on your own.’ He was in my house for almost two years.

“But that was what kept me going — ‘Well you didn’t set out to get a reward or pat on the back. You set out to specifically give this guy a platform to go in a different direction. So regardless of his appreciation or the stress factors or any of it, are you willing to go in that direction?’” he asked himself. “And that’s what that Maui thing was. I was over there with a friend and I was like, ‘I know how to take this to the next level’ because, ultimately, it has to be his own thing.”

It sound like a perfect movie script — and Lewis says they did film a lot of it — but he’s not keen on the idea.  “I don’t like writing about myself,” he says.

Lewis also downplays his role in helping the spirit and autonomy of this man.

“I don’t matter in his life. We’re all the peanut gallery of everybody else’s life,” he says.

When told he made a significant contribution to his life, he concedes a tad. “I might have, but it’s still his life to lead.  And so how do you give that to somebody — that motivation rather than help them?”

Lewis may have had another motivation to dive into helping another individual in such an all-consuming way. Last year, he lost both his grandparents, whom he calls mentors. One of his grandfathers instilled in him a great love for the environment and since his fame as an actor had aligned himself with such environmental charities as Global Green, the United States affiliate of Green Cross International.

“I definitely grew up in that environmentalist mentality. One of my mentors was my grandfather and he was a Dust Bowl baby,” Lewis says, going on to explain the history of the Oklahoma dust storms of the 30s that caused severe ecological and agricultural damage to American and Canadian prairie regions.

“The entire plains turned into giant dust storms over farming and lack of understanding eroded all the topsoil. There were storms that reached New York City from Oklahoma so the Mid-West starved. And here’s a guy who literally grew up shooting and pulling out of the ground what they needed to survive. So in the middle of downtown Long Beach [California] he had a two-acre plot and I farmed with him as a kid.

“A lot of that influenced how I saw the world and that I was actually in it because he grew up in a time when you lived in the environment and existed,” Lewis explains. “In my own personal life, I believe in trying to do everything you can to be good to the environment. We definitely need to look at the fact that we’re way past the tipping point of our resources.”

The environment, children and the homeless are the causes Lewis focuses on and he’s often asked to show up for one-off charity events to add cachet to the lineup. While he does do that, he prefers to be less public when it comes to giving back.

He brings up an incident that might, on the surface, seem like such a small gesture of advice. He was volunteering at non-profit resource and service centre Chrysalis, which helps the homeless and low-income individuals find jobs.

“If you go work with homeless people, you tend to understand that most of them were never shown, and didn’t have the necessary imagination resources, to make the leap by themselves. It’s the ‘give a man a rod; teach him to fish’ mentality,” Lewis says.

“I remember writing this letter with this guy and he’s apologizing for his whole life and then he was like ‘Please hire me.’ And I was like, ‘You’re trying to sell your positive attributes here so you don’t wanna be apologizing,’ and he was like, ‘What do you mean?’ I’m like, ‘You don’t have to apologize for all the mistakes you made in your life, nor do they need to know about them.’

“You saw the light bulb go off in his head, like ‘Right!’ because no one had ever shown him how to write a letter or the concept of your audience. So I like to be engaged.  I have definitely found in my own life that charity does feel better on a personal level.”